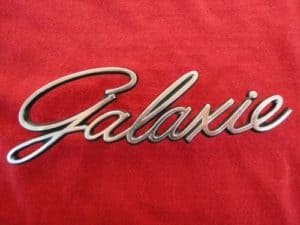 The Ford Galaxie was a full-size car built in the United States by the Ford Motor Company for model years 1959 through 1974. A version of the car was also produced in Brazil under the names Galaxie 500, LTD and Landau from 1967 to 1983. As often is the case with American cars, model names shifted around from year to year, but the Galaxie was always part of Ford’s full-size car line. In the late 1960s, the low trim Fords were named Custom and Custom 500, while the high end models were the XL and LTD; the Galaxie was the high volume counterpart to the Chevrolet Impala.

For 1961, the bodywork was redone again, although the underpinnings were the same as 1960. This time, the tailfins were almost gone; replacing them were two giant circular taillights at each rear corner. Performance was beginning to be a selling point, and the 1961 Galaxie offered a new 390 CID (6.4 L) version of Ford’s FE series pushrod V8,and a 390 was also made available with either a four-barrel carburetor or, for serious performance, three twin-barrel units. The latter was rated at 400 hp, making even such a heavy car quite fast indeed. The Starliner was again offered this year, and Ford promoted this model with lots of luxury and power equipment, but it was dropped at the end of the year, as the re-introduced square-roof hardtop coupe took the bulk of sales.

For 1962, the Galaxie name was applied to all of Ford’s full size models, as Fairlane moved to a new intermediate and Custom was temporarily retired. New top-line Galaxie 500 and Galaxie 500/XL models were also introduced. Performance wasn’t ignored either, with an even larger 406 CID (6.7 L) engine being available, again in triple-carbureted “six-barrel” form. At the other end of the spectrum, of course, a “Mileage Maker” 6-cylinder engine was available for the more budget-minded driver. Tailfins were gone, giving the ’62s a more rounded, softer rear end look. Taillights were set lower into the rear panel, and were partially sunken into the newly-sculped rear bumper.

For 1963, Ford saw no reason to radically change a good thing, and the 1963 model was essentially unchanged save for some freshening and added trim. A lower, fastback roofline was added mid year to improve looks and make the big cars more competitive on the NASCAR tracks. This 1963½ model was called the “Sports Roof” or “Scatback” hardtop. While not much changed for the everyday buyer, for the performance oriented things were a little different — for partway through this year and in limited quantities there became available Ford’s new racing secret weapon, the 427, replacing the 406. This new engine, designed for performance rather than refinement, was offered to the public simply because racing rules required the use of only engines sold in sufficient numbers in production vehicles. Ford took the 427 CID (7.0 L) equipped Galaxie to the dragstrip in serious fashion beginning in 1963, building a number of lightweight cars just for that purpose. They featured fiberglass fenders, doors, trunklid and aluminum bumpers. Rated conservatively at 425 hp (317 kW), this engine also featured in Carroll Shelby’s final incarnation of the AC Cobra. The base Galaxie was joined in 1963 by the barebones Ford 300 sedan targeted to fleet buyers. Inside, the ’63 featured a totally new instrument panel, and gone was the separate column for the shift lever located above the steering column (Chevrolet had eliminated this design in 1954).

1964 was the fourth and final year of this body style. Interior trim was much altered, and the exterior featured a more sculpted look which was actually designed to make the car more aerodynamic for NASCAR. The formal-roof “boxtop” style was replaced by the slanted-roof design for all non-wagon or convertible models, including sedans. Ford’s quality control, spotty when the first Galaxie was introduced, was now as good as it ever was, and many ’64 Fords passed the 100,000 mile mark intact. The ’64s gained an enviable reputation as durable, comfortable cars that offered decent handling and roadability at a reasonable price, so it is no wonder they sold so well. Of the XL models, the ’64 hardtop coupe takes the prize for the most produced. The base Ford 300 model was replaced by a line of Custom and Custom 500 models.

Under the hood, the 427 CID (7.0 L) engine carried on the high performance duties. Ford again took the 427-equipped Galaxie to the racetracks in serious fashion in 1964, building a number of lightweight, fiberglass equipped cars just for that purpose. These competed with success not only in North America but also in the United Kingdom. Initial doubts as to their competitiveness in Britain were short-lived; despite their great size and weight compared to the opposition, the Ford 427 engine gave them a competitive power-to-weight ratio and the handling was better than might have been supposed. They were raced in Europe reasonably successfully. The 427 was the powerplant of the dominant Ford GT40 Mk II.

Late in the year Ford introduced their new engine challenger, the SOHC 427 Cammer, Though not documented, it is believed a few may have found their way onto the street (this engine was only available to racers through the dealer network or from the manufacturer; none were ever factory installed). Rated at over 600 hp (447 kW), this is possibly the most powerful engine ever fitted to a production car by an American manufacturer. NASCAR changed the rules, however, requiring thousands (rather than hundreds) of production examples in service to qualify for the next season, and Ford decided against producing the Cammer in that quantity. Fears of liability concerns and the bad publicity possibilities in giving the public a car that dangerously powerful are often cited as reasons, but it might simply have been that Ford doubted that an engine so unsuited to street use could sell in such numbers.

The 1965 Galaxie was an all-new design, featuring vertically stacked dual headlights in what was becoming the fashionable style in a car somewhat taller and bulkier than the previous year’s. The new top-of-the-line designation this year was the Galaxie 500 LTD. Engine choices were the same as 1964.

1966 saw a new model, the Galaxie 500 7 Litre, fitted with a new engine, the 428 CID (7.01 L) Thunderbird V8. As the name suggests, this engine was also available on the Ford Thunderbird and was a response to a demand for a more docile, tractable engine than the racing-built 427. The 1966 LTD dropped the Galaxie name, a harbinger of changes to come. The 1966 bodystyle was introduced in Brazil as a 1967 model; it had the same external dimensions throughout its lifetime until Brazilian production ceased in 1983.

In 1967, the 7 Litre model no longer carried the Galaxie name; it was to be the last year of it being separately identified. That identification was mainly trim such as horn ring and dashboard markings as well as the “Q” in the VIN number. The 7 Litre in ’67 was basically a trim and performance option on the XL model. Little else changed except for trim and the styling; the same engine range, from a 240 CID (3.9 L) six-cylinder to the 428 CID (7.0 L) V8. Modifications to the styling included adding a major bend in the center of the grille, and making the model less “boxy” than the 1966 model.

The 1968 model had a new grille with headlights arranged horizontally, although the body was essentially the same. The ‘long hood, short deck’ style was followed too, as was the new trend for concealed headlights, though the latter appeared only on the XL and LTD.

The 1969 model was built on a new bigger body. It was the end for the 427 and 428 engines. Replacing it was the new 429 ThunderJet taken from the Ford Thunderbird, part of a new Ford engine family. Power was higher than the 428 and lower than the racing-bred 427. The dashboard was built as a pod around the driver rather than traditionally extending across both sides. The XL had rear sail panels to simulate a fastback. The rear trim panel below the stop lights were used to distinguish the different trim levels from the bare Custom to the LTD. The Country Squire was perhaps the pinnacle of design for that wagon with the concealed headlights.