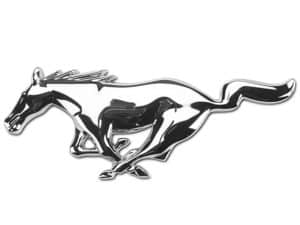 The Ford Mustang is an automobile manufactured by the Ford Motor Company. It was initially based on the Ford Falcon, a compact car. Production began in Dearborn, Michigan on 9 March 1964 and the car was introduced to the public on 17 April 1964 at the New York World’s Fair.

It was Ford’s most successful launch since the Model A.

Executive stylist John Najjar, who was a fan of the World War II P-51 Mustang fighter plane, suggested the name.

The Mustang created the “pony car” class of American automobile — sports car-like sedans with long hoods and short rear decks—and gave rise to competitors such as GM’s Camaro, AMC’s Javelin, and Chrysler’s revamped Barracuda. It also inspired coupés such as the Toyota Celica and Ford Capri, which were exported to America.

Mustangs grew larger and heavier with each model year until, in response to the 1971-1973 models, fans of the original 1964 design wrote to Ford urging a return to its size and concept.

Although some other pony cars have seen a revival, the Mustang is the only original pony car that has remained in production without interruption after four decades of development and revision.

Conceived by Ford product manager Donald N. Frey and championed by Ford Division general manager Lee Iacocca, the Mustang prototype was a two-seat, front-mounted engine roadster. This would later be remodeled as a four-seat car penned by David Ash and John Oros in Ford’s Lincoln–Mercury Division design studios, which produced the winning design in an intramural design contest instigated by Iacocca. To cut down the development cost and achieve a suggested retail price of US$2,368, the Mustang was based heavily on familiar yet simple components. Much of the chassis, suspension, and drivetrain components were derived from the Ford Falcon and Fairlane.

The car had the the 1964 Falcon’s monocoque platform-type frame, with welded box-section side rails and cross-members.

Media exposure began on 16 April 1964 with commercials broadcast by all three American television networks to reach 29 million TV viewers, followed by announcement advertisements and publicity articles in 2,600 newspapers the next morning, the day the car was “officially” revealed. A Mustang also appeared in the James Bond film Goldfinger in September 1964, the first time the car was used in a movie.

Original sales forecasts projected less than 100,000 units for the first year, but in its first eighteen months, more than one million Mustangs were built.

The 1970s brought about more stringent pollution laws and the OPEC oil embargo. As a result, large, fuel-inefficient cars fell into disfavor, and the Pony Cars were no exception. Lee Iacocca, who became president of the Ford Motor Company in 1964 and was the driving force behind the original Mustang, ordered a smaller, more fuel-efficient Mustang for 1974. Initially it was to be based on the Ford Maverick, but ultimately was based on the Ford Pinto subcompact.

The new model was introduced two months before the first “Energy Crisis” in October 1973, and its reduced size allowed it to compete more effectively against smaller imported sports coupés such as the Japanese Toyota Celica and the European Ford Capri (then Ford-built in Germany and Britain, sold in U.S. by Mercury as a captive import car). First-year sales were 385,993 cars, compared with the original Mustang’s twelve-month sales record of 418,812.

Lee Iacocca wanted the new car, which returned the Mustang to more than a semblance of its 1964 predecessor in size, shape, and overall styling, to be finished to a high standard, saying it should be “a little jewel.” However not only was it smaller than the original car, but it was also heavier, owing to the addition of equipment needed to meet new U.S. emission and safety regulations. Performance was reduced, and despite the car’s new handling and engineering features the galloping mustang emblem “became a less muscular steed that seemed to be cantering.”

The car was available in coupé and hatchback versions. Changes introduced in 1975 included reinstatement of the 302 CID V8 option (called the “5.0 L” although its capacity was 4.94 L) and availability of an economy option called the “MPG Stallion”. Other changes in appearance and performance came with a “Cobra II” version in 1976 and a “King Cobra” in 1978.

The 1979 Mustang was based on the larger Fox platform (initially developed for the 1978 Ford Fairmont and Mercury Zephyr). The interior was restyled to accommodate four people in comfort despite a smaller rear seat. The trunk was larger, as was the engine bay, for easier service access.

In response to slumping sales and escalating fuel prices during the early 1980s, a new Mustang was in developement. It was to be a variant of the Mazda MX-6 assembled at AutoAlliance International in Flat Rock, Michigan. Enthusiasts wrote to Ford objecting to the proposed change to a front-wheel drive, Japanese-designed Mustang without a V8 option. The result was a major facelift of the existing Mustang in 1987, while the MX-6 variant became the 1989 Ford Probe.

In 1994 the Mustang underwent its first major redesign in fifteen years. Code named “SN-95” by Ford, it was based on an updated version of the rear-wheel drive Fox platform called “Fox-4.” The new styling by Patrick Schiavone incorporated several styling cues from earlier Mustangs. For the first time a notchback coupe model was unavailable.

For 1999, the Mustang received Ford’s New Edge styling theme with sharper contours, larger wheel arches, and creases in its bodywork, but its basic proportions, interior design, and chassis remained the same as the previous model. The Mustang’s powertrains were carried over for 1999 but benefitted from new improvements. The standard 3.8 L V6, thanks to a new split-port induction system, now produced 190 hp (142 kW; 1999-2004)[24] while the Mustang GT’s 4.6 L V8 saw an increase in output to 260 hp (194 kW; 1999-2004), thanks to a new head design and other enhancements.

The fifth-generation Mustang is manufactured at the AutoAlliance International plant in Flat Rock, Michigan. The base model is powered by a 210 hp (157 kW) cast-iron block 4.0 L SOHC V6, which replaces the 3.8 L pushrod V6 used previously. The Mustang GT features an aluminum block 4.6 L SOHC 3-valve Modular V8 with variable camshaft timing (VCT) that produces 300 hp (224 kW). The 2005 Mustang GT has an approximate weight to power ratio of 11.5 lb/bhp. The base Mustang comes with a standard Tremec T-5 5-speed manual transmission while Ford’s own 5R55S 5-speed automatic, a Mustang first, is optional. Though the Mustang GT features the same automatic transmission as the V6 model, the Tremec T-5 manual is substituted with the heavier duty Tremec TR-3650 5-speed manual transmission to better handle the GT’s extra power.