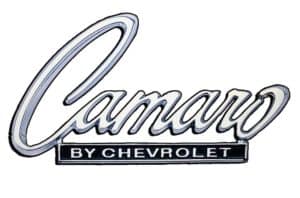 The Chevrolet Camaro is a pony car manufactured by the Chevrolet division of General Motors. It went on sale on September 29, 1966 for the 1967 model year and was designed as a competing model to the Ford Mustang. The car shared the platform and major components with the Pontiac Firebird, also introduced for 1967. Four distinct generations of the car were produced before production ended in 2002. A new fifth-generation Camaro will roll off assembly lines in spring of 2009.

The Camaro was first shown at a press preview in Detroit, Michigan on September 12, 1966 and then later in Los Angeles, California on September 19, 1966. The Camaro officially went on sale in dealerships on September 29, 1966 for the 1967 model year.

The first-generation Chevrolet Camaro debuted in September 1966, for the 1967 model year, up to 1969 on a brand new rear-wheel drive GM F-body platform and would be available as a 2-door, 2+2 seating, coupe or convertible with a choice of inline-6 and 302 cu in, 307 cu in, 327 cu in, 350 cu in, or 396 cu in V8 powerplants. The first-generation Camaro would last until the 1969 model year and would eventually inspire the design of the new retro fifth-generation Camaro.

Introduced in February 1970, the second-generation Chevrolet Camaro would be in production for a total of 11 years. The car grew somewhat larger and wider with the new styling, thus resulting in a heavier car. Still based on the F-body platform, the new Camaro was engineered much like its predecessor in that it still used a unibody structure with a front subframe, leaf springs in the back and A-arms up front for suspension. The car would see major changes in both styling and performance as time progressed from the introduction through the end of second-generation production in 1981.

The third-generation Chevrolet Camaro was introduced for the 1982 model year. It continued to use General Motors’ F-body platform and would produce a “20th Anniversary Commemorative Edition” for 1987 and a “25th Anniversary Heritage Edition” for 1992. These were also the first Camaros with throttle body fuel injection, Turbo-Hydramatic 700R4 four-speed automatic transmissions, five-speed manual transmissions, 15 inch or 16-inch wheels, hatchback bodies, and a rear window third brake light. It was during the third generation that the famous IROC-Z Camaro (International Race Of Champions) was available, which included upgrades such as Performance Suspension and 16-inch Z rated tires. The third-generation Camaros would continue through the 1992 model year.

The fourth-generation Chevrolet Camaro debuted for the 1993 model year on an updated F-body platform. It would retain the same characteristics since the first-generation’s introduction back in 1967; 2-doors, 2+2 seating, available as a coupé (with optional T-top roof) or convertible (with the latter introduced in 1994), rear-wheel drive, and a choice of V6 and V8 powerplants. Options included the 207 cu in with 160 hp V6 (changed to 3.8 L (232 cu in) 200 hp (149 kW) V6 in mid-1995) and the LT1 V8 engine 350 cu in with 275hp that had been introduced in the Corvette one year earlier, as well as an optional six-speed manual transmission. The 1997 model year introduced a newer interior, while the 1998 model year was refreshed and revised with both exterior and engine changes. The new engine was GM’s all-aluminum LS1 (346 CID) which had been introduced with the Corvette C5.

The fourth-gen Camaro would last up through the 2002 model year, marking 35 years of continuous production. Production of the F-Body platform was stopped due to slow sales, a deteriorated sports coupe market, and plant overcapacity.

Based on the 2006 Camaro Concept and 2007 Camaro Convertible Concept, production of the fifth-generation Camaro was approved on 5 August 2006. Oshawa Car Assembly will produce the new Camaro which will go on sale in spring of 2009 as a 2010 model year vehicle. The 2010 model is offered as a coupe only in LS, LT, and SS trim levels. The LS and LT trim levels will be powered by the LLT 3.6 L (220 cu in) V6 producing 300 hp. The SS with manual transmission is powered by the LS3 6.2 L (378 cu in) V8 producing 422 hp while the SS with automatic transmission is power by a new L99 6.2 L V8 with Active Fuel Management producing 400 hp. The RS appearance package will be available on both the LT and SS. Production will begin on 16 February 2009 as a 2010 model year.

The picture of the 78 is wrong