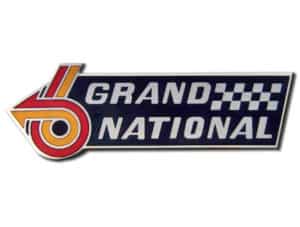 For the final year, 1987, Buick introduced the GNX at $29,000. Produced by McLaren/ASC, Buick underrated the GNX at 276 hp and a very substantial 360 lb/ft of torque. This was created to be “Grand National to end all Grand Nationals.” Changes the the GNX included a special Garrett ceramic-impeller turbocharger connected to a more efficient intercooler and a specially coated up pipe. A specific computer chip, low-restriction exhaust with dual mufflers, reprogrammed Turbo Hydramatic 200-4R transmission with a custom torque converter and transmission cooler, and unique differential cover/panhard bar included more of the performance modifications. The GNX had a ladder bar that ran from the mid-section of the car to the rear axle, so as to increase traction. This is also the reason why a GNX will actually lift the rear end up when the car is about to launch heavily.

The interior changes of the GNX included a serial number on the dash plaque and a revised instrument cluster providing analog Stewart-Warner gauges, including an analog turbo boost gauge. Just 547 examples of the GTX were built. GNX #001 is currently owned by Buick and sometimes makes appearances at car shows around the US.