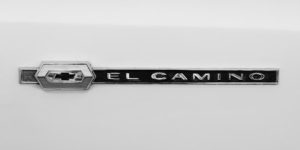 That 1964 El Camino was basically identical to the Chevelle forward of the B-pillars, but Chevrolet considered the vehicle a practical, utility model and the Chevelle’s most powerful engines were not available.

The year 1967 also brought options of disc brakes, Turbo 400 3 speed transmission and the collapsable steering column for the first time. It was the pinnacle year for the 2nd generation El Camino. 2,565 El Camino Customs came with the 396 big block. That option came with the Powerglide, Turbo-Hydro 400 automatic, manual 3 speed or two choices of 4 speed manual Muncie transmissions. The 396 four speed equipped El Caminos were the most rare with less than 500 units sold.

1968 introduced a longer El Camino, based on the station wagon/4-door sedan wheelbase. A new, high performance Super Sport SS396 version was launched, alongside the Chevelle version. 1969 models were very similar, but 1970 saw the availability of a new SS396 which actually displaced 402 cu in (although all emblems read 396). Chevrolet’s largest and most-powerful engine of the time was also put into a select few El Caminos. The LS6 454 cu in engine, rated at 450 hp and 500 lb·ft of torque, gave the El Camino 1/4 mile times in the upper 13 second range at almost 105 mph. 1969 also marked the first time that the legendary Chevrolet 350 V-8 was used in an El Camino.

The 1971 model saw reduced power and performance, along with the rest of Chevrolet’s line, as lower-octane unleaded fuel was mandated, and emissions controls began to be felt. Single headlights replaced double for 1971, and the grille came now to a point. Little changed but still lower power outputs for 1972.

For 1973, the El Camino was restyled again, matching changes to the Chevelle. It was the largest generation of El Camino, but thanks to lighter construction, it weighed less than the previous generation. A front-end restyle with quad stacked headlights was done in 1976, but otherwise it was the same truck until 1978.