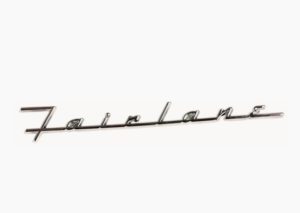 The Fairlane was revised in 1966. XL, GT and GTA packages were introduced, as well as a convertible to join the existing range of sedans, hardtops and station wagons. The “K-code” 289 was dropped this year. GT featured a 390 CID V8 as standard, while the GTA had a SportShift Cruise-o-Matic automatic transmission. The base 390 CID engine, meanwhile, developed 335 bhp and had a four-barrel carburetor. Mid year, Ford produced 60 special Fairlane 500 2-door hardtops with a ‘”R-code” 427 CID unit rated at 425 bhp and equipped with Ford’s “Top-Loader” 4-speed manual transmission. Built to qualify the engine/transmission combination for NHRA and IHRA Super Stock racing, they were white and had a fiberglass hood with a forward facing hood scoop which ended at the edge of the hood. The Fairlane Squire wagon débuted for 1966.

Minor trim changes were introduced for 1967 as the Fairlane was mildly facelifted. The 289 CID small-block became the base V8, with a 200-cubic-inch six standard, with the 390 CID optional (with either two- or four-barrel carburetor, at 275 and 320 bhp respectively). The 427s were still available, either with a single four-barrel carburetor or dual quad carbs, developing 410 (Q-code) and 425 bhp (R-code) respectively; however, 427s were not available on XL models. 1967 Fairlanes also saw the introduction of a number of Federal government-mandated safety features, including a new energy-absorbing steering column with large padded steering wheel hub, soft interior trim, 4-way hazard flashers, a dual-chamber braking system and shoulder belt anchors.

As the muscle car market took shape, Ford introduced the Fairlane Thunderbolt for drag strip racing for 1964, heavily modified to incorporate a 427 CID (7.0 L) V8 with two four-barrel carburetors on a high-riser manifold, ram-air through the openings left by deleting the inboard headlights, equal-length headers, trunk-mounted battery, fiberglass hood, doors, fenders and front bumper, acrylic glass windows, and other lightweight options including deleted rear door window winders, carpeting, radio, sealant, sun visors, armrests, jack, lug wrench, heater, soundproofing, and passenger side windshield wiper. This special model, of which 111 to 127 total were made depending on who you ask, delivered 500 hp at 7,000 rpm and was known as the Thunderbolt.

Racing in NHRA Super Stock class on 7 inch tires, the Thunderbolt was based on the mid-level Fairlane 500 two door pillared sedan, and set elapsed time and top speed records in 1964 at 11.6 seconds and 124 mph, took the Super Stock title, and won the Manufacturer’s Cup; it is very possibly the fastest drag racing production car ever produced. The car as delivered was in fact slightly too light to meet the NHRA 3200 lb minimum weight unless it was raced with a full tank of gasoline, which would bring it to 3203 lb. NHRA rules then required a metal front bumper, so the cars began to be supplied with an aluminum bumper and previous purchasers were supplied with one.

Finally the NHRA changed the rules to require 500 models of a car to be manufactured for Super Stock competition, and Ford, which had been losing $1500 to $2000 on each Thunderbolt sold at the sticker price of $3900, gave up. The first 11 Thunderbolts were painted maroon, which was known as Vintage Burgundy in Ford literature, the rest were white; 99 had manual transmissions. Many still race, still delivering quarter mile elapsed times in the very impressive 11 second range and occasionally lower. About 50 similar Mercury Comet Cyclones were also produced by Ford in 1964, destined to be modified to represent Ford in A/FX competition, which they dominated as well.

A redesign took place in 1968. The wheelbase remained at 116 in but it grew in other dimensions. A fastback Sportsroof model was introduced in the Fairlane 500 series, as well as a more luxurious Torino model at the top of the intermediate range. The Ranch Wagon model name was deleted: Fairlane wagons had either the base or the 500 trim. The GTs were part of the Torino range, with a 302 CID as standard, with optional engines being the 390 CID V8 in 2 and 4-barrel version. The 390 4-barrel was supplanted mid-year as the top performance engine by the “Cobra Jet 428”, developing 335 bhp. There was even a “Super Cobra Jet”. The Ranchero had a GT model, in addition to standard and 500 versions.

The Cobra was introduced in 1969 as a competitor for Plymouth’s Road Runner. Basic models featured the 302 CID V8 and three-speed manual transmission as standard. Options included the 390 CID and two 428 CID V8s. The Cobras, meanwhile, had a standard 428 CID V8 with 335 bhp, and options included bucket seats, hood scoop, clock, tachometer, power disc brakes and 4·30-to-1 gearing. “Regular” Fairlanes and Rancheros continued, all with bucket-seat options.

An even more powerful version, the Torino Talladega, was created to compete on the NASCAR Grand National speedways. Only 754 were built. Like the Plymouth Superbird, the Sportsroof-based Talledega got a sloped nose and flush grille. The 428 CID V8 was standard, but mated to a C-6 Cruise-o-Matic automatic transmission.

The Fairlane grew again in 1970, now with a 117 in wheelbase. The largest engine was now a 429 CID with four-barrel carburetor and 360 bhp, on the Torino Cobra. Different heads were optional and gave the Cobra 370 bhp and higher compression. Other options included the Cobra Jet Ram Air 429, though Ford quoted the same power output, and the Drag Pack rated at 375 bhp. However, the 1970s were slower than the ’69s, and race teams were forced to run the older models.