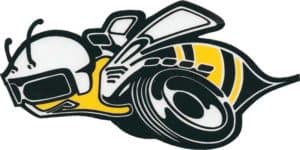 The original Super Bee was based on the Dodge Coronet. It was a 2-door coupe model only and was produced from 1968 through 1970. It was the company’s low-priced muscle car, the equivalent of the Plymouth Road Runner, and was priced at $3,027. Plymouth Division had introduced the Road Runner first and the car sold well, prompting Dodge Division General Manager, Robert McCurry to have the Dodge Styling office create a competitor. During that time, both divisions were competing to be the “Chrysler Performance Division.” The designers were assigned the task of creating a name and identity for the Dodge version. Senior designer Harvey J Winn won the “contest” with the name Super Bee and a new logo design around the Dodge “Scat Pack” Bee medallion. The first Super Bee was based on a ’68 Coronet convertible. The show car was built at Alexander Brothers Custom Shop under Winn’s direction and was introduced at the the 1968 Detroit Auto Show.

The Super Bee included a heavy-duty suspension, an optional Mopar A-833 four-speed manual transmission, and high-performance tires. Outside, a stripe (with the bee logo) was wrapped around the tail.

A hardtop version joined the existing pillared coupe body for 1969, and a new optional twin-scooped air induction hood was now available and became known as the “Ramcharger”. This particular option was coded N-96 and was the counterpart to the Plymouth Road Runner’s “Coyote Duster” air induction hood. Of particular interest is that the Super Bee’s “Ramcharger” hood featured forward-facing scoops which were far more efficient than the Road Runner’s “twin vents” which merely laid flat on the hood, not forcing air in to the carburetor(s) as the Super Bee’s did. Regardless of whether it was a Road Runner or Super Bee, the N-96 option commands immediate, extra respect whether it was at a stoplight or at the ever-present, modern day collector car auctions, as this option will drive up the selling price over a non N-96 equipped car. A “six-pack” (three two-barrel carburetors) version of Dodge’s 440 cubic inch engine was added to the offering list mid-year. This option fell half-way between the standard engine and the Hemi as a $463 option. The 1969 model year gave Chrysler customers several engines to choose from. The base 383hp (high performance), 440 Six Pack, and the 426 Hemi. The 440 Magnum (4bbl) was not an available option, and was reserved for the Coronet R/T. For 1970 the Super Bee received a cosmetic redesign and was given a new front end that consisted of a twin-looped front bumper that Dodge PR referred to as “bumble bee wings”. This new look turned off many buyers and the sales plummeted for the year, but ironically this particular design change is what makes it the most popular year of Super Bee to own in present day. Despite the new looks, the engine choices, as well as the “ramcharger” hood carried over from 1969. The 1970 cars from Dodge were chock-full of new and improved options, for example: a “double hockey stick stripe” variant of the bumble stripe was offered in addition to new high-back bucket seats, steering column mounted ignition as well as a “pistol-grip” Hurst shifter on four speed models. Rumors abound of the many concept and show vehicles Chrysler produced during the musclecar era, including producing 4 concept Superbee convertibles. The where-abouts of these 4 cars are unknown.