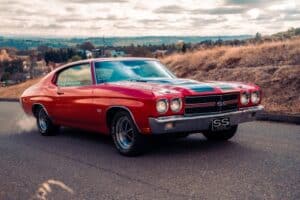 Muscle cars have always been special machines. The magic ingredients have always included a large engine and a light weight body.  When the American auto builders mixed these two ingredients the results were legendary.

Some automotive historians trace the origins of the muscle car all the way back to when Oldsmobile stuffed a 303 cubic inch overhead-valve V8 into the 1949 Rocket 88. The car produced a whopping 135 horse power. Amazingly, that’s all it took to be king of the performance hill in 1949.

Performance continued to improve at a snail’s pace over the next decade. By 1955 Chrysler was on top of the p

erformance hill with their classic C-300. The C-300 was a big car but with the 300 horse power Hemi it was the most powerful American car manufactured in 1955. The Hemi could propel the luxury car from zero to sixty in 9.8 seconds and it had a top speed of 130 mph.  These performance numbers were tame compared to what would happen during the next decade.

The 1960’s was the golden age of the muscle car. The decade started with cars build specifically for the drag racing crowd. The compact Dodge Dart was fitted with a 413ci Max Wedge engine and promptly dominated the strip. Ford created the Thunderbolt from a stripped down Fairlane. With its fiberglass body boards and its lack of all comfort features, it was a real barn burner. Quarter mile times of less than twelve seconds were common. Ford also offered 200 copies of a stripped down version of the Galaxies with a 427 cubic inch engine. This was the same engine powering the Thunderbolt. These were very limited production models and only a few copies were sold. The only muscle car offered to the masses during the early part of the decade was the Impala Super Sport with a 409ci engine. 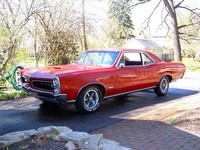 Ford was the next manufacturer to hit a home run with a performance car. The Mustang changed everything. Anyone with eyes saw that good performance, good looks and an affordable price sold cars. General Motors quickly added the Chevelle Super Sport, the Buick Gran Sport and the Olds 442 to its muscle car stable. The boys at mopar began stuffing HEMIs and big blocks into everything they could. Chargers, Coronets and GTXs all became legends. The rare HEMI and the much more practical and accommodating 440ci big blocks were street terrors. Ford had the Fairlane and the Galaxies for those wanting something a little larger than the original pony car.

Ford’s competitors raced furiously to introduce pony cars of their own. Plymouth quickly launched the Barracuda and even beat the Mustang to market. By 1967 GM introduced the Camaro and the Firebird. The next year AMC launched the AMX and the Javelin. Chrysler finally introduced viable pony cars in 1970 with the introduction of the Challenger and the newly designed Barracuda.

By the end of the decade, performance models were available everywhere and anyone with a down payment could spend their weekends burning rubber. It was the golden age of the muscle car.

The 1970’s started out well enough. Many consider 1970 as the pinnacle year for classic muscle cars.  Then the world changed, fuel prices began to rise, the insurance companies started raising rates and the economy began to slow down. By 1974 all the original muscle cars were just shadows of their former selves.  Performance was no longer a consideration for the automotive customer was looking for fuel economy, not tire burning performance. The Mustang was neutered, the ‘Cuda and Challenger were discontinued. The Chargers and Chevelles were now mid-priced luxury cars. The only cars to continue the tradition were the Firebird and the Camaro. Although, they too were much less powerful than they’d been just a few years earlier. 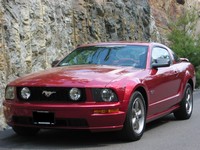 Nothing much happened until the Ford Mustang was reintroduced in 1979 as a performance model. The market had rested long enough. By 1982 a new Camaro and Firebird were rolled out. In 1984 Chevrolet introduced a new Corvette.  Buick decided to shake things up with the Grand National. By 1987 the Grand National had become one of the fiercest muscle cars ever. Performance was back. Muscle cars continued to gradually improve all the way to the turn of the century. The cars kept getting better and better and by the late 1990’s these new muscle cars out did their classic muscle cars in every category. Performance, comfort, reliability and fuel consumption were all much better than they were in the 1960s. Amazingly, no one cared. Sales were down across the board. GM even stopped production of the Camaro and Firebird in 2002.

In 2005 Ford redesigned the Mustang and for the third time, the Mustang changed the automotive landscape. Sales exploded and people loved the retro look. At the same time, Chrysler developed a new line of rear wheel drive intermediates and the Charger with an optional HEMI engine was born. The muscle car was back. Dodge followed up the Charger with a retro Challenger and Chevrolet is racing to re-introduce a classic Camaro.  The muscle car is back.

This was very helpful thank you! 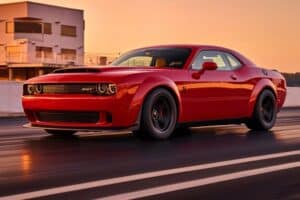 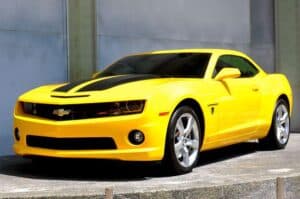