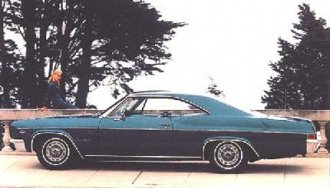 After the Impala sales high of 1965, which has yet to be topped by any car company, there was unfortunately nowhere for the car to go but down. And while sales of the Impala line as a whole remained relatively high, the Impala suffered the worst fate as its production was cut by more than 50 percent.

The reason for the sales decline had to do with a number of factors, not the least of which was Chevy’s decision to make the Caprice– introduced as an upgrade package for the Impala the previous year – into its own model this year. A luxury model of the car, the Caprice replaced the Impala SS as the top-of-the line Chevy full-size car, and Impala SS sales would never fully recover.

But there were still many high points for the car, including the 427 CID V8 introduced for the year. There were two versions of the engine, one rated at 390 horsepower and another “special performance” option rated at 425 horsepower due to its aluminum manifold and heavy duty four-bolt main block.

The previous year’s 396 CID V8 was still available, as well. This year, however, there was only one version of that engine, and it produced 325 horsepower. The base V8 was once again a 327 CID motor that produced 275 horsepower. Impala-buyers also could choose a 250 CID six-cylinder engine that had been introduced the previous year, though relatively few did.

The regular Impalas were slightly more boxy than the previous year’s models had been, and in addition to the new grille also got revised fenders and bumpers. The new taillights were rectangular and wrapped around the rear of the car.

Throughout the production year, about 654,900 Impalas were produced, not including the Impala SS models (or the Caprice model that was now its own line). The cars had a base price this year of $2,678, which was just about the same as it had been the previous year.

As it had been since 1964, the SS was its own Impala line not grouped in with the other models, and could be had with any engine in the line including the six-cylinder. The model distinguished itself from other Impalas with slim-profile Strato-bucket front seats which were new for the year, as well as other sporty trim both inside and outside the car.

The total production for the Impala SS for the year was 119,314. This was disappointing considering the huge sales numbers the model posted the previous year. The Caprice model outsold the SS, with around 181,000 models produced in 1966.

The Caprice wasn’t the only thing holding back Impala SS sales, it was also losing sales to smaller and lighter muscle cars that were taking over American cars at the time. The Impala had played a large part in making sporty and more powerful cars popular throughout the early 1960s, but as the end of the decade began to come near, the smaller cars that had nearly the same performance were gaining greater favor from drivers. And as sales of those cars continued to rise, sales of the Impala SS would continue to fall throughout the rest of the decade. The mighty Impala that had started the muscle car craze would, unfortunately, never return to its former glory. 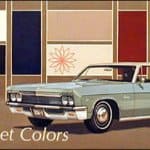 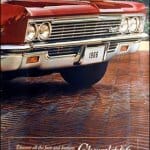