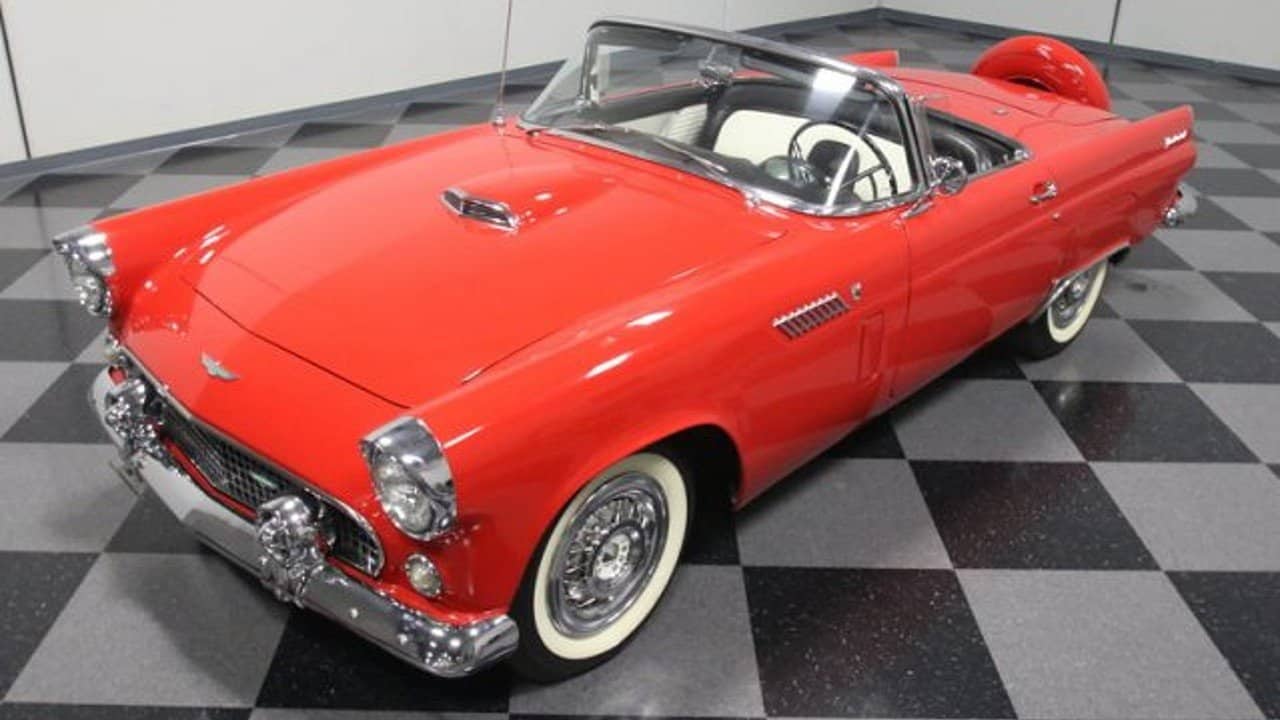 After the success of the 1955 Thunderbirds, very few changes were made to the 1956 models. Other than the aforementioned Continental Kit, the main visual changes were found in more numerous color options on the interior and exterior of the car.

But the biggest news for the 1956 models was the new more powerful V8 engine options. While the Thunderbird was still (and always would be) marketed as a “personal luxury” car rather than a sports car, the higher performance option was a nice touch. This was particularly true since the car’s main competition, the Corvette, had eliminated its inline six standard motor option and also offered two V8 engines in 1956.

The new 4-barrel 312 V8 produced 215 horsepower, and that number was increased to 225 if the optional Ford-O-Matic automatic transmission was chosen. The base engine was the same engine found in all 1955 models, a 4-barrel 292 V8 rated at 193 horsepower. With the Ford-O-Matic option, the horsepower for that engine was increased to 198. An additional change to the 1956 model was that the electrical system was bumped up from six volts to 12.

For 1956, the exterior color options increased to 13 two-tone combinations. Seven body colors were available: Colonial White, Thunderbird Gray, Raven Black, Peacock Blue, Buckskin Tan, Thunderbird Green and Fiesta Red. A hardtop that matched the body color had to be custom ordered from Ford, though it didn’t cost extra. As had been the case in 1955, there were two roof options, a fabric convertible top and a removable hard top, now complete with the portholes that provided much better visibility. There were five two-tone color combinations to choose from for the interior of the car.

Once again, only one model of the Thunderbird was available, though many options were available. The carpet and steering wheel were color-keyed to each interior color choice. Cowl side vents became a standard feature in 1956, as did new glass wind deflectors. Other standard features included courtesy interior lights with automatic door switches, dual horns and a glove box. Options included four-way power seats, power brakes, power windows, power steering, rear fender shields, radio and heater.

The Thunderbird was designed as least in part to compete with the Corvette as the consumer interest in two-seater sports cars began to rise in the early 1950s. While this stemmed in large part from the European sports cars many Americans had seen during thier time in World War II, the Corvette was still the Thunderbird’s main competition in 1956.

As it had the year before, the Thunderbird easily outsold the Corvette, and even with the lower production number, there still were more than 12,000 more Thunderbirds produced than Corvettes. This is in part because of Ford’s “personal luxury car” marketing strategy that gave the car a more widespread appeal. 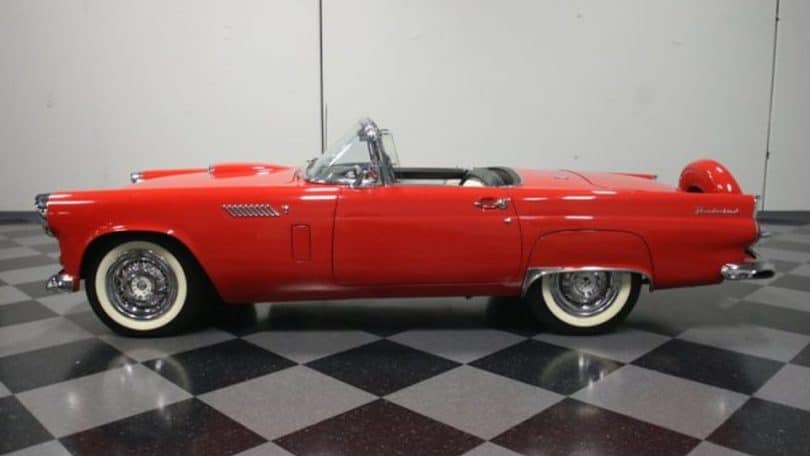 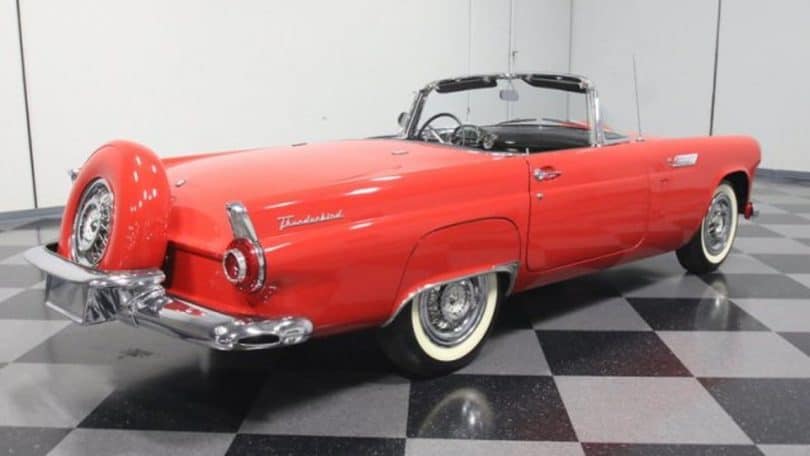 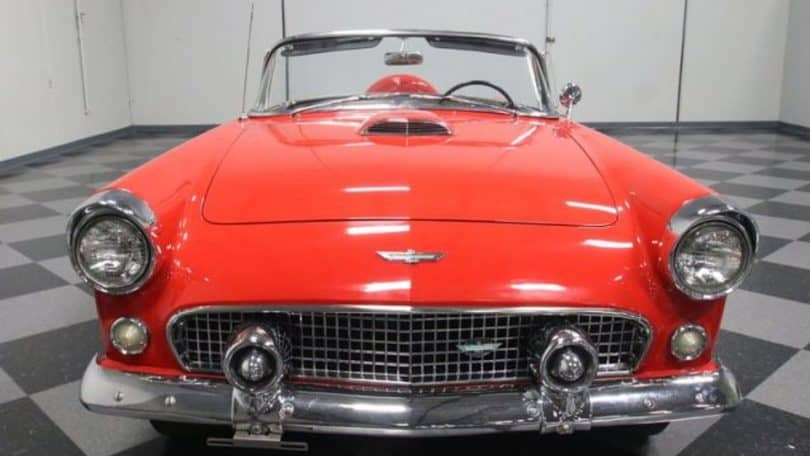 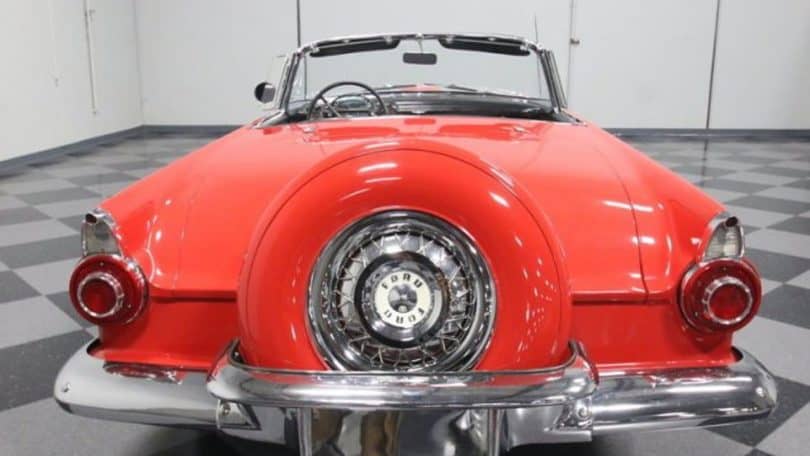 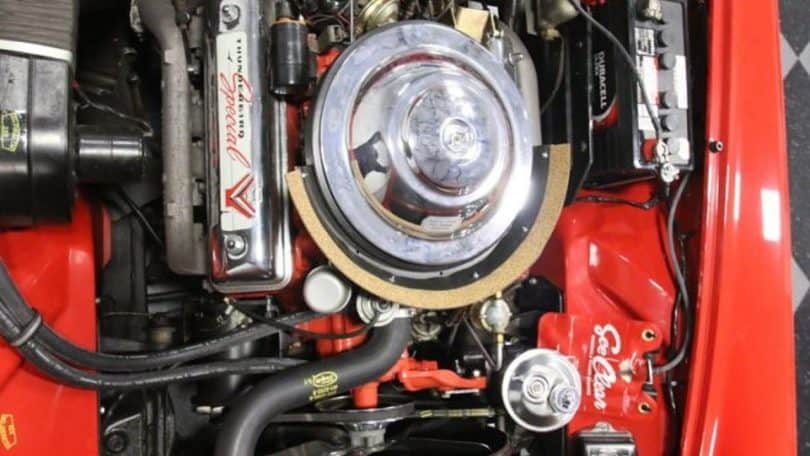 Today, automobiles are loaded with safety features, electronic gadgets galore and perform to standards unimaginable just a few decades ago. In 1956, an AM radio and automatic windshield wipers were the latest innovations. Times have changes and for the better. But, and this is a big but, the design of these classic Thunderbirds is truly amazing. The exterior lines are smooth and the interior is a thing of art. Basic and without any excess, the interior is the essence of what a car could and should be. It would be impossible to replicate that look today; the market just wouldn’t stand for it. Everyone expects more of this and more of that, however, more is not always better.