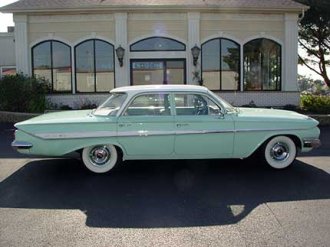 “My four-speed, dual-quad, Posi-traction 4-0-9,” sang the Beach Boys on their 1962 song “The 409,” and the 409 they were singing about was sitting inside of the new SS models of Chevy’s top performer – the Impala. The Impala’s legend was being established almost as soon as it was introduced.

Though the 1961 Impala was only the fourth production year of the car, it was already in its third generation as a Chevy continuously tweaked the car they promoted as their top model of the full-size Chevrolets. Many refer to the Impala as the first muscle car, and the SS version of the 1961 model could be seen as a more specific starting point for the class. In fact, the 1961 Impala would go on to be heralded as one of the best and most memorable Chevys of the 1960s.

The Impala had been designed since its beginning as a combination of full-size luxury and sportiness, and had fulfilled the role well, but the introduction of the 409 not only introduced even more power to the car, it would start the other two car makers in the “Big Three” scrambling to equal (and then exceed) its power. But the engine wasn’t the only Impala option available.

Impalas equipped with the SS package, which added $53.80 to the price of the car, came with the choice of one of three 348 CID V8s, which ranged from 305 to 350 horsepower. Throughout the year, 453 Impalas included the SS package, and most of them were Sports Coupe models of the car. There was also a four-door hardtop and station wagon versions of the Impala available. Of the SS models produced, only 142 included the now iconic 409 engine. That engine produced 360 horsepower and 409 lbs./ft of torque.

The SS version of the was marketed by Chevy as a “highly personalized version” of the Impala, and included heavy duty springs and shocks, a padded instrument panel, a tachometer and 14-inch narrow band whitewall tires. An optional four-speed manual transmission for the largest V8s came with a distinctive floor-mounted gear shift.

While the new high performance options were part of what made the 1961 Impala exciting, there also were options for those who didn’t need as much power. At the bottom end of the Impala’s power option was a 235 CID six-cylinder engine that produced 135 horsepower, and then there were two 283 V8s buyers could choose from: one with 170 horsepower and the other with 230 horsepower. The ability to customize the car with a variety of specifications was part of the Impala’s appeal, and around 491,000 Impalas were built during the model year, and of those, around 64,600 were convertibles. The base price of the car was $2,536.

The 409 engine was introduced in response to Ford’s new 390 CID V8. That engine was rated at 375 horsepower, so Chevy’s was more impressive in size (and name) than actual performance in 1961. However, this competition is part of what would start all auto makers to continue to upgrade performance throughout the rest of the 1960s, hence the name of the Impala as the first muscle car.

Additionally, the Impala itself would already begin to increase its own horsepower by the following year, as maximum performance would grow to 409 horsepower with the addition of a new 2×4-barrel version of the 409. The 1961 Impala was really the start of something special when it came to high performance cars.