“Go ahead and let them think you splurged. The new Chevrolet offers you more luxury, more style in the most luxurious Chevrolet ever built.” 1964 Chevrolet sales brochure

With the growing success of the SS package as an option on the early-1960s Impala’s, Chevy decided to make the package into its own distinctive model with the 1966 Impala. Production options were just about the same as they had been the for the SS packages the previous year, but with car-buyers growing demand for more power, it made sense to further distinguish the real sports option of the Impala.

In fact, 1964 marked the first year since the third generation of the Impala was introduced in 1961 that there weren’t significant performance increases in the available engine options. But sales numbers were continually reaching toward all-time highs, so it appeared that this fact didn’t bother Impala buyers.

At the top of the performance heap were two versions of Chevy’s now famous 409 CID V8 engine. By 1964 the engine had already worked its way even into the pop music scene as it was immortalized by the Beach Boys 1962 hit, “The 409,” but performance enthusiasts were more concerned with what the engine would do on the road. The single 4-barrel version of the engine produced either 340 or 400 horsepower depending on the version, while the 2×4-barrel version was rated at 425 horsepower. But of course, these weren’t the only engines available – in fact there were a total of seven engine options.

At the bottom of the line was a 230 CID six cylinder engine that produced 140 horsepower. However, that option didn’t entice many buyers and was by far the lowest selling model. There were two version of the base V8 – a 283 CID motor rated at 170 or 195 horsepower depending on what version was chosen. Finally, a 300-horsepower, 327 V8 could be chosen as well.

The Super Sport (SS) models included nearly identical upgrades as the SS package had the year before, including front bucket seats and special “leather-like” vinyl. The SS models were available in convertible Impala models or the hard top Sports Coupe.

Sales of the SS model also were up, and 185,325 were produced for the year (this number is included in the total Impala production listed above). Of those, an impressive 8,684 included a version of the 409 engine.

While the Impala line as a whole was one of the best-selling car makes on American roads in 1964, it would soon begin to experience competition from a new breed of car that it helped inspire. When the 409 was first installed in 1961 Impalas, it became what many consider the first true muscle car. But by the mid-60s, car makers were putting their newly successful more powerful engines in smaller, even sportier cars.

The quintessential muscle cars we know today, including the Pontiac GTO and the Chevy Chevelle may have been inspired by the Impala, but would soon supersede the model in sales. But the SS model still had some growing to do and would hit an all-time sales high the following year. 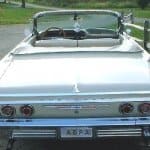 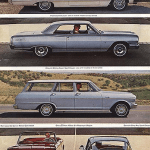