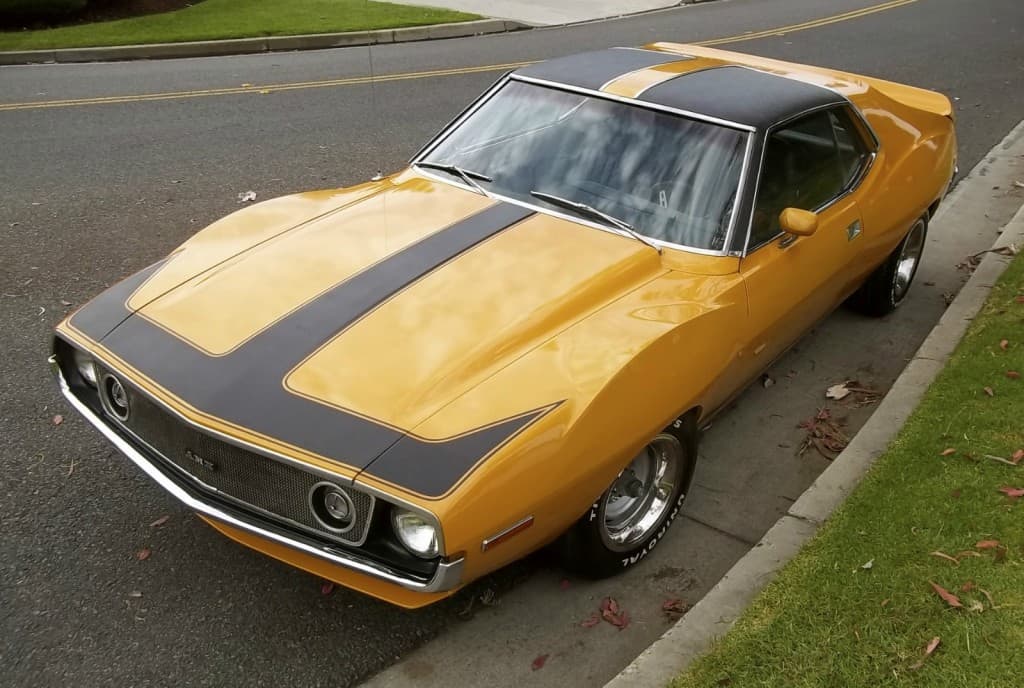 “Styling so hairy we even risked turning some people off.” 1971 Javelin sales brochure

In his book, “Collectible Cars,” Richard M. Langworth describes the look that head designer Richard A. Teague gave to the original first-generation Javelins: “Teague managed to endow the Javelin with what he termed the wet T-shirt look: voluptuous curves with nary a hint of fat.”

Well, the new 1971 Javelins still didn’t have any fat, but they sure had some added muscle under those curves. As most pony cars were bulking up (both on the outside and under the hood) to compete with the reigning muscle car craze of the time, the Javelin followed suit with larger dimensions, flared front fenders, a sharper fast back design and more powerful engine options.

The 390 CID V8 that had available as the top engine option since the Javelin was introduced in 1968 was replaced in 1971 by a 401 CID V8 that produced 330 horsepower. Below that were 2- and 4- barrel versions of a 360 CID V8, the former of which was standard in the Javelin AMX. The final V8 available was a 304 CID engine that produced 210 horsepower. Even with the higher engine options, AMC gave more choice to those purchasing a car with a six-cylinder engine. In addition to the 232 CID six that had been available since 1968, customers could choose from a 258 CID six that produced 150 horsepower (the 232 was rated at 135 horses).

Despite the exciting new look, sales still dropped throughout the year for the car as compared to the previous year, though not as much as it had the year before. Total production was 29,054, which represented a 3.73 percent drop from 1970.

Though the interior also was redesigned the standard features available on the base model Javelins was similar to those that had been available since 1968, including vinyl front bucket seats, and a Weather-Eye heating and ventilation system. The base price increased nearly six percent from the year before to $2,879, and estimated production was 8,000.

In addition to the features that came with the base model, the SST added a custom steering wheel and upgraded interior and exterior trim. The SST was the best-selling Javelin model, as it had been since 1969, and estimated total production was at 19,000. The base price came in just a dollar shy of the $3,000 mark.

While most of the pony cars had a “luxury” trim model, the AMX attempted to be both the luxurious and sportiest Javelin model. In addition to including a front console and updated interior trim that included a three-spoke steering wheel, these models also added slot-style wheels, a space saver spare tire and white-lettered tires.

Though engines in 1971 were already being altered to accept only unleaded fuel, new emissions standards would be introduced the following year that would threaten power even further. Additionally, as of 1972, all horsepower ratings would be expressed as net horsepower rather than gross, which gave the impression of less power.

In a trend similar to 1970, sales of all pony cars with the exception of the Pontiac Firebird were down from the previous year. Plymouth Barracuda dropped so far that it reclaimed its spot at the bottom of the pony car heap from the Javelin, and Mustang was still the best selling pony car. 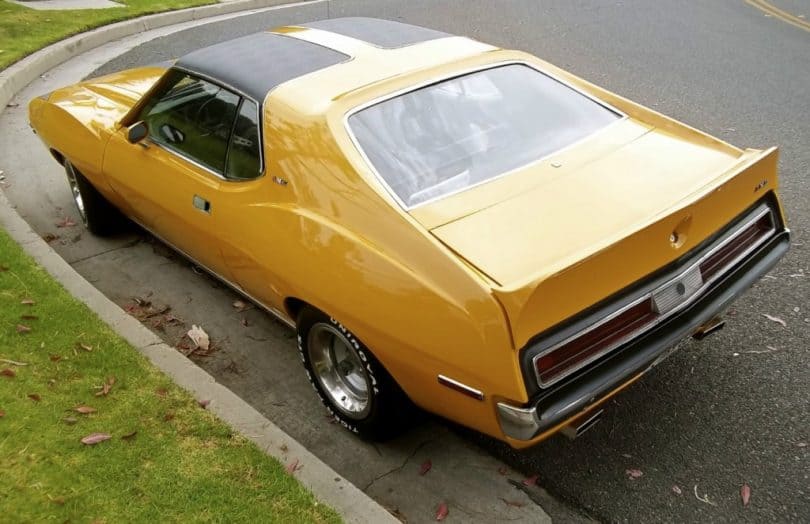 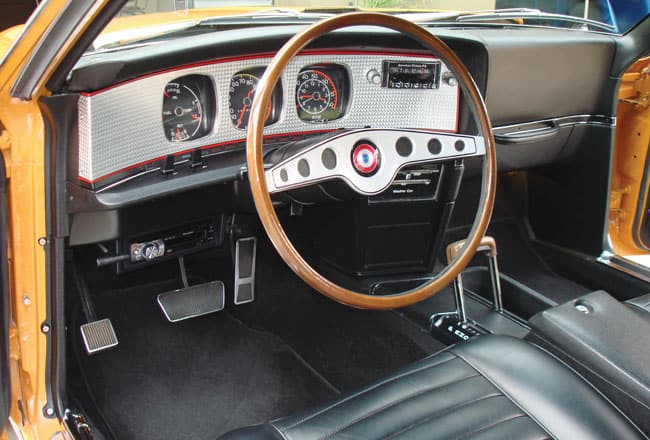 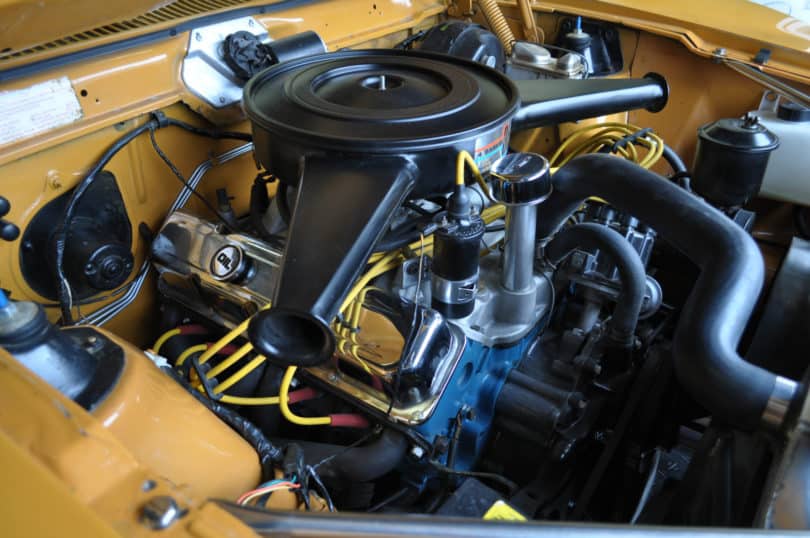 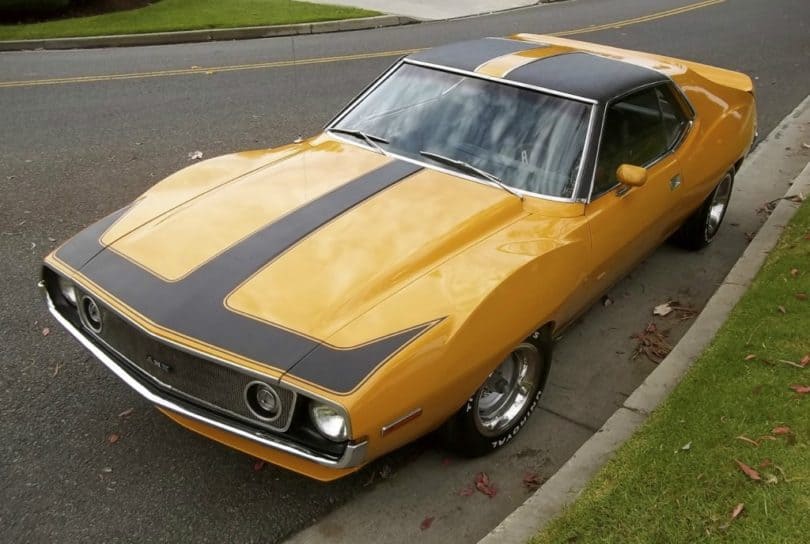 AMC ended production of the two seater AMX the previous year and made the AMX the nomenclature for the top of the line Javelin. But the real news for Javelin fans was from Alabama. One hundred of these cars were purchased for the Alabama State Patrol to use as interceptors. That had to be a fun assignment for those lucky enough to be assigned one.