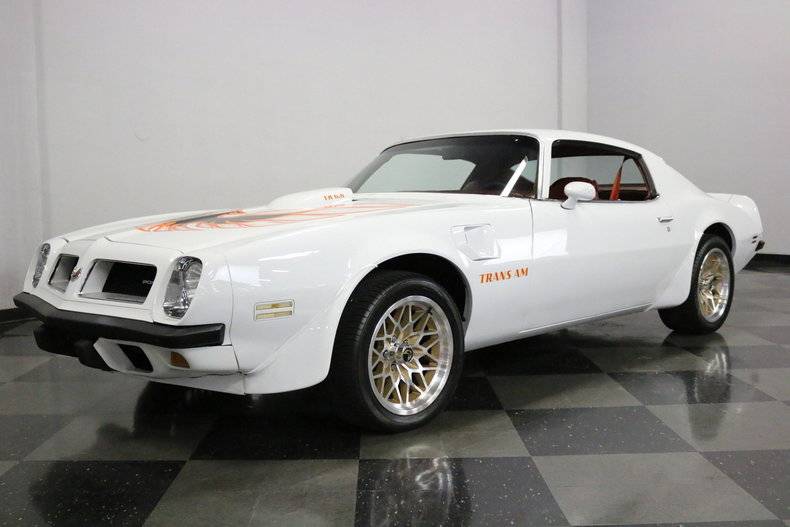 “There are many tough decisions in life. You’re about to make one. Because there are four fantastic Pontiac Firebirds this year.” 1974 Firebird sales brochure

The SD-455 engine was an exciting addition to the Firebird engine lineup in 1973, and it was a shame that it would only be around for two years. At a time when most pony cars were seeing their maximum available power decreasing, the Firebird increased power with the new engine. Though the horsepower ratings were at 310 and 290 for 1973 and 74, respectively, many experts feel this underrepresented the power of the engine. Many felt the 1973 version was producing at least 370 horsepower, and experts saw no performance change with the 1974 engines, even with the reported horsepower drop.

The new front and rear design came from the government’s new 5 MPH bumper requirement that put an end to the Endura rubber bumper. This also resulted in a revised taillight design.

As it had been since the second-generation models were introduced in 1970, Firebird was available in four models: base, Esprit, Formula and Trans Am. Engine options were nearly the same as they had been in 1973, though there was an addition 400 CID V8 available for the 1974 models.

The base engine was a 250 CID six-cylinder rated at 100 horsepower. Horsepower was expressed in net ratings rather than gross for all engines per a 1972 government regulation. The base V8 was a 350 CID engine that was rated at 155 horsepower. From there, customers could upgrade to the 175 horsepower 400 CID V8. A different version of the 400 produced 225 horsepower, and was now standard on the Trans Am. Although the Trans Am previously had come with a 455 engine standard, the smaller engine likely represented Pontiac’s reaction to the oil crisis of 1973. The car saved on gas but still had desirable look of the Trans Am. Trans Am buyers also could opt for a non-SD 455 CID V8. Nearly 1,000 buyers opted for the SD engine.

Total Firebird production was up drastically for the year model to 73,729, compared with 46,313 the year before. The base model reclaimed its spot on the top of the Firebird sales heap (Esprit was the best selling 1973 model), and 26,372 were produced. The base price was $3,335.

The Esprit was designed to be the luxury model Firebird and also included the base V8 engine standard. Other standard features for the model included custom bucket seats, cut pile carpeting that was new for the year model and a cushion steering wheel. Total production was 22,583, and the base price for the model was $3,687.

The Formula models answered the Esprit’s luxury with performance. Also equipped standard with the base V8, the models had a heavy duty suspension for improved performance. Total production was 14,519, and the base price for the cars was $3,659.

While including the 400 CID V8 as an option for those that were fuel conscious, The Trans Am also was offered with the two 455 CID engines for those that just wanted the power of a Trans Am. Production was up drastically to 10,255 (from 4,802 the previous year), and the model would be the top selling Firebird by the following year.

1974 marked the end of most pony cars. Ford converted the Mustang to a compact car that year with the Mustang II and made the Mercury Cougar into a mid-sized luxury car. Other than the Camaro, the rest of the pony cars (AMC Javelin, Dodge Challenger, Plymouth Barracuda) were discontinued.

But for the Firebird, the year marked a new beginning. Not only did sales grow in 1974, they would continue to do so every year through the end of the decade. The Trans Am model would become enormously popular, and the Firebird, along with the Camaro, would be the only pony cars left on the road for the rest of the decade. 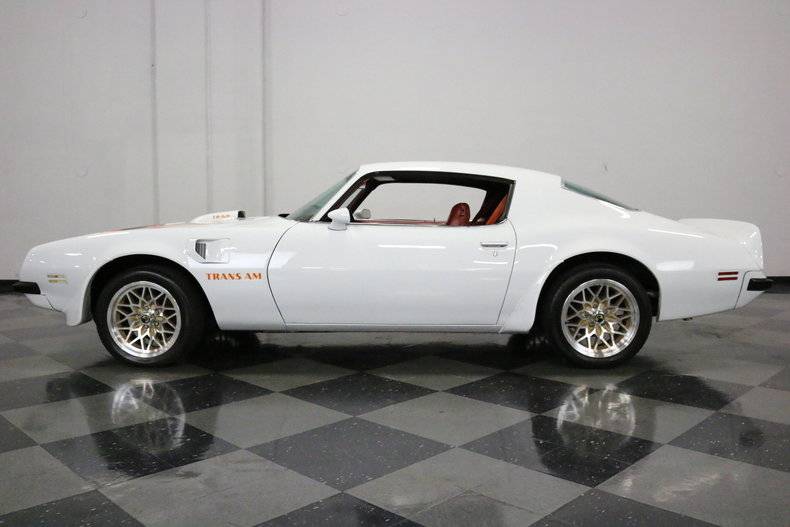 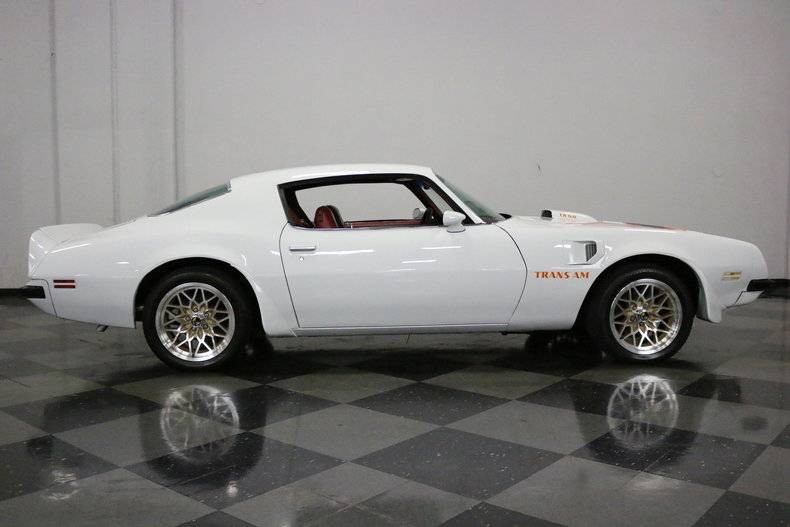 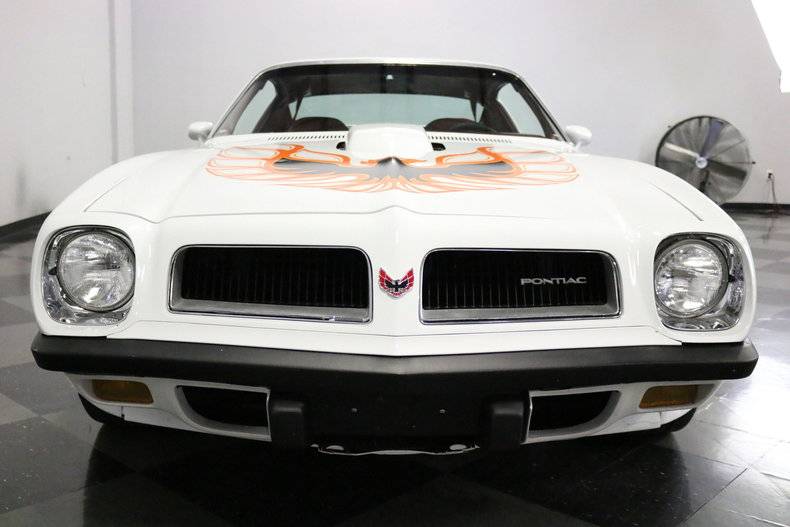 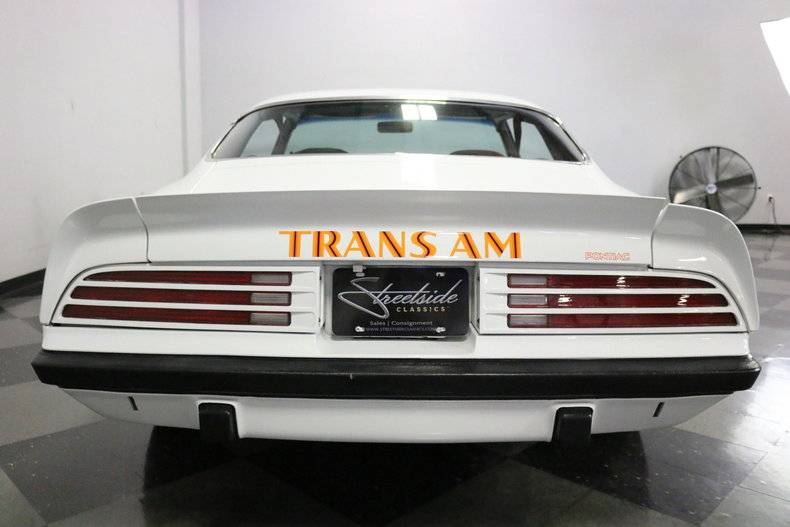 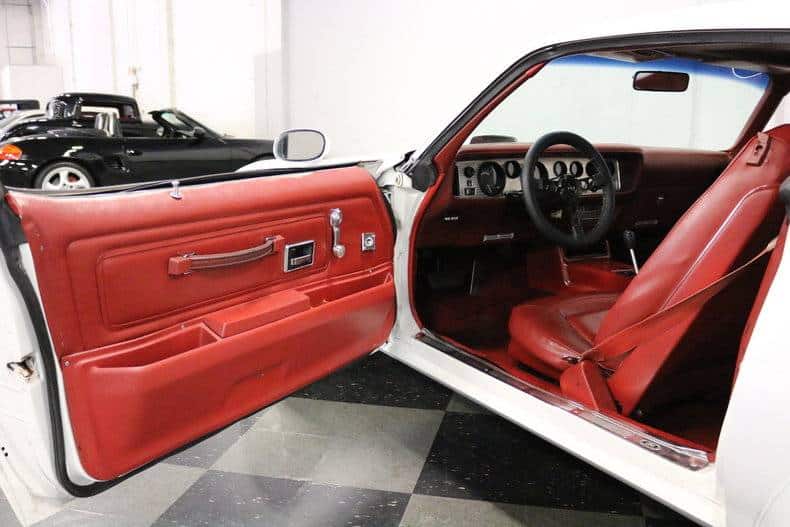 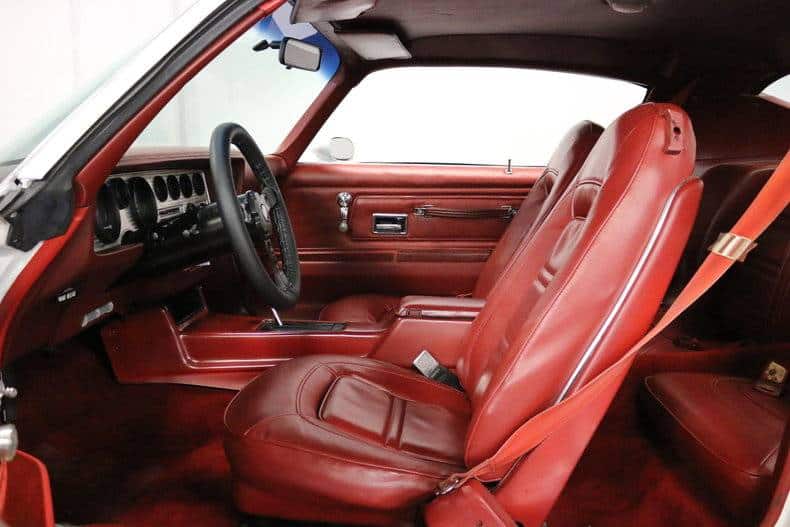 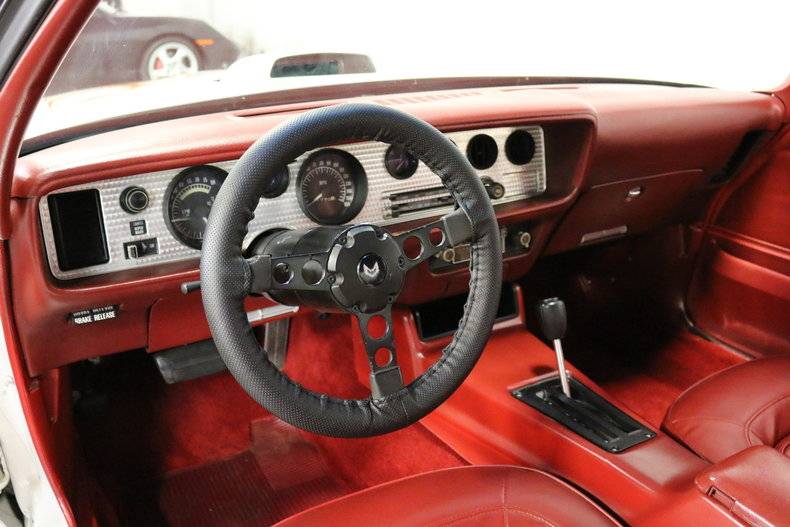 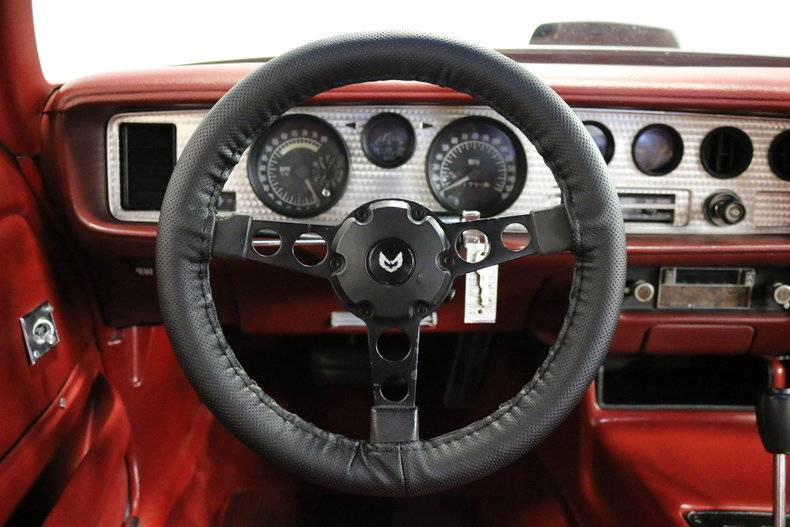 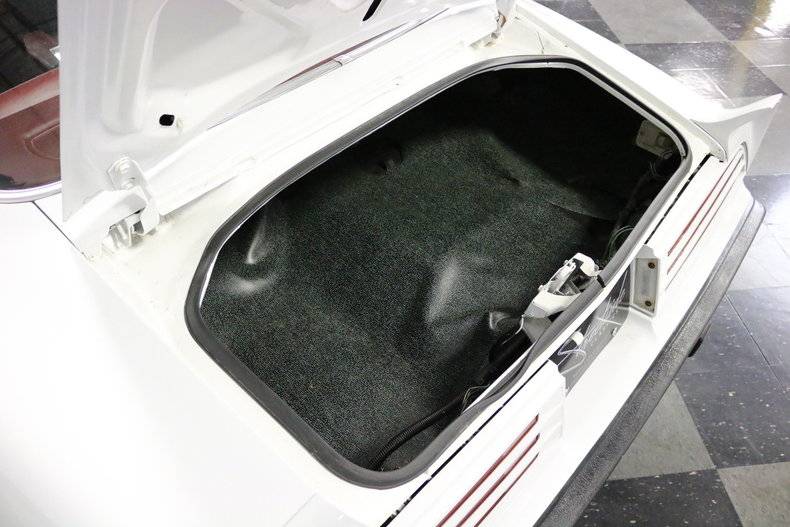 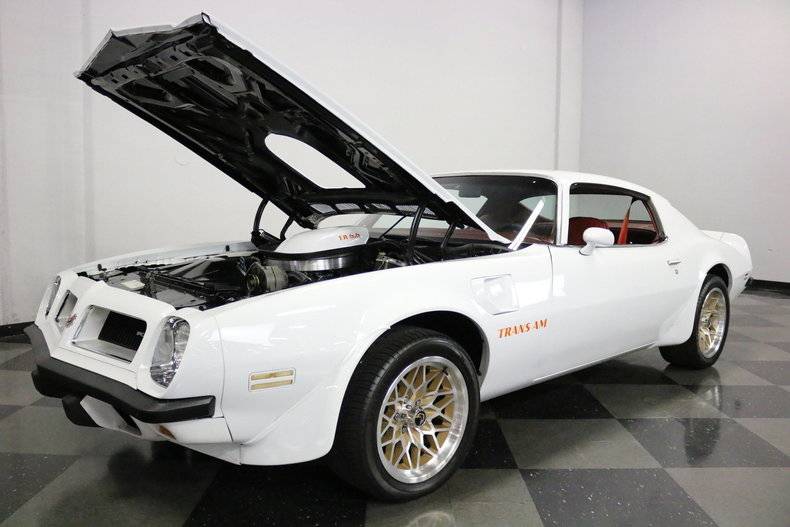 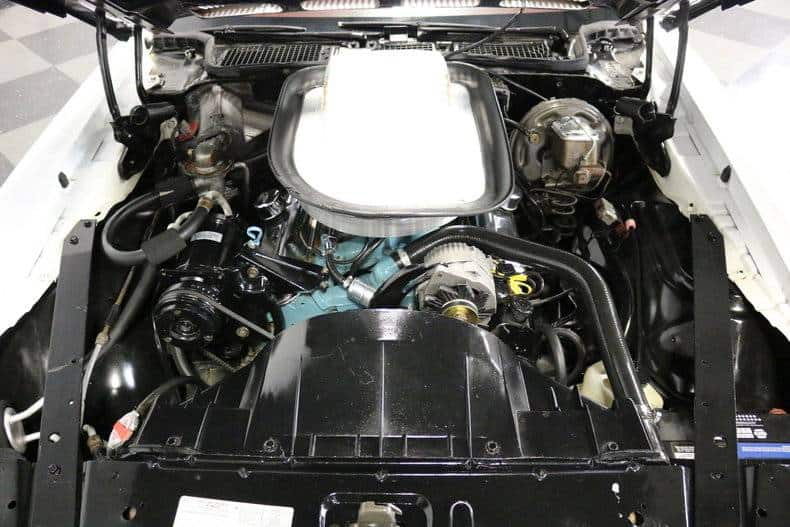 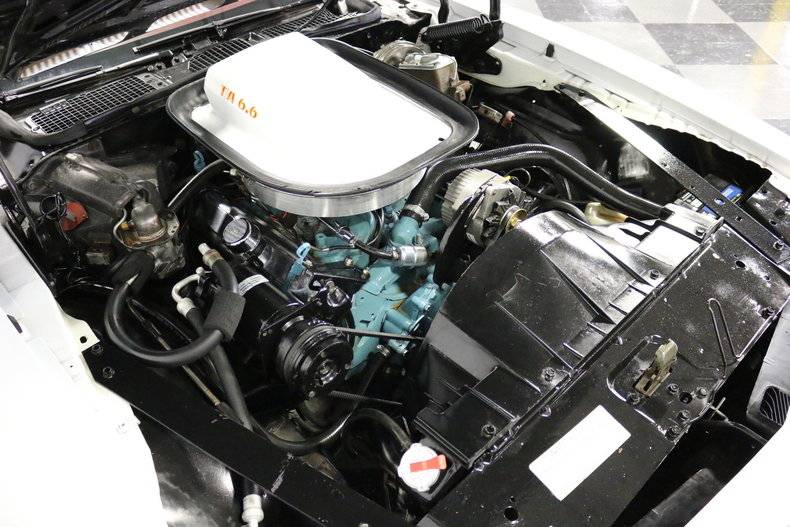 When the world gave up on performance; the Trans A

This is the last true muscle car of a dying breed. This could be called the forgotten high performance car. Saddly this is true, but in 1974 Poniac refused to get rid of the muscle car. John Delorean would’ve liked nothing different. By 74 the Vette had lost almost half of its horsepower, the trans am grew to a under rated 310 or 270. In reality the 310 was like 350 from the 455 big block. This car could out perform anything that came out in 74. Nothing was faster. Nothing would be faster for five years.
This car was either a modest 150hp 350ci, a 400 with 230(used all through the 70’s) and a monster 455ci. I’ve been in the 400 and 455,(with 270hp not super duty) and they were fun. The 455 seems to be better all around. Infact handling wasn’t much worse than the late Trans Ams; and they handled wonderfully. Pulling a .84g(74) compared to the 79 that had a .86g. Not bad for a big block, but I wouldn’t try to race a newer performance car in it. Still, it was quick; but, nothing like the “SD” Trans Am. That car was made for speed. The stock 455 would hit 60 in 6.8sec(stick) and 7.2(auto); the Super Duty would launch you to 60 in 5.3secs and do a standing quarter of 13.5 with a top end of 145mph. The tight gearing would put the quarter under 12secs of slicks. This is a ton of performance in any time period; but look at the other performance cars of the day. The Vette barly hit 60 in 8secs, and the Ferrari Dino hit 60 in 7.4secs. The Firebird was reliable and fast. The best of both worlds. What I can tell you with both 74s I was in, they are noisey and cluncky. The ride is lacking much, and I couldn’t really see this as a everyday driver. I mean it would get unconfortable.(Like most performance cars) The gas milage was horrible, the 400 I was told got 18mpg highway! The 455 was around 9 average. Both ruff estimates, but bad regardless. Neither one complained of any problems, or flaws. So if you want one, I hope that helps.
The 74 SD Trans AM is aruably the best muscle car ever, and one of the most sought after. Fetching over well $100,000 in many cases. Not as handsome as the 60’s or late 70’s , but makes up for it with spunk.