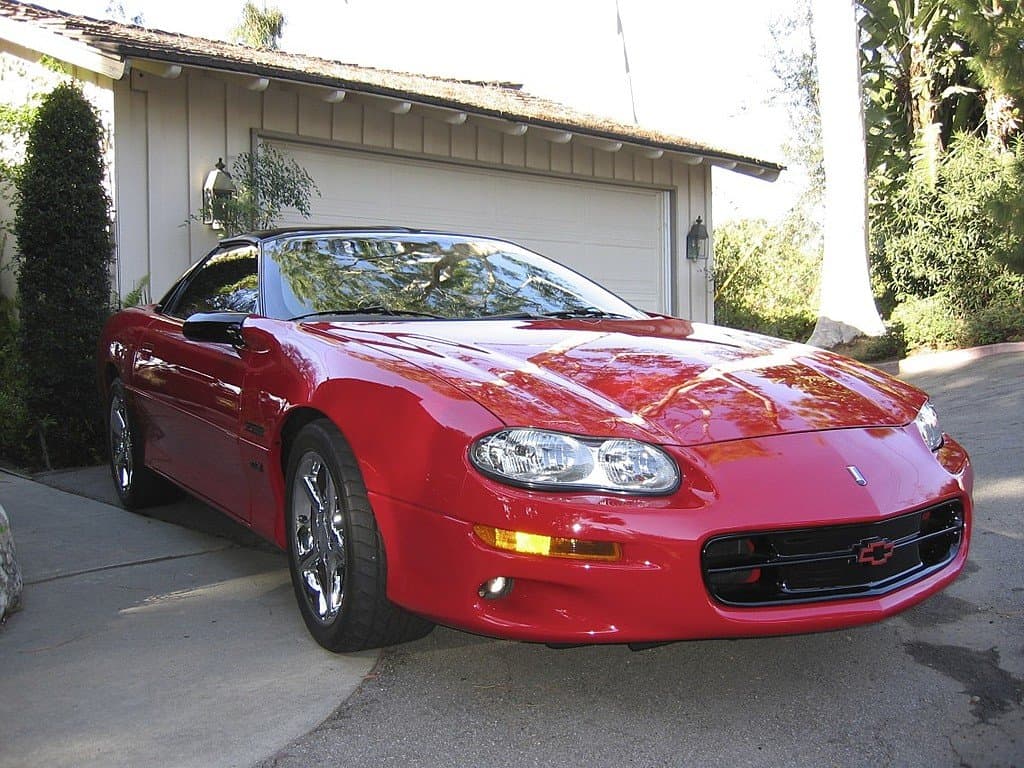 After a relatively high sales year in 1997, Chevrolet decided to try its luck at slightly updating the exterior of the car while keeping prices nearly constant from the previous year. Gone were the inset square headlights that had their stylistic origins from the beginning of the second-generation Camaros back in 1982, and they were replaced by flush mounted lights. Though total production did fall, there were still 77,198 Camaros produced during the 1998 model year. This number would seem great compared to the following year’s production number.

The other big news was that new powerful engine under the hood. The V8 came standard with both the Z28 and SS Camaro models. It was a 5.7 litre motor with an aluminum cylinder block. The new engine shaved nearly 100 pounds of weight off the previous V8, which also was a 5.7 litre engine but had an iron block. The base motor was the same that was used in the previous year, and was a 3.8 litre V6 featuring a respectable 200 horsepower. A handling package could be added to the V6 models to give them a better driving feel without having to pay the extra for a Z28 or SS.

Though the RS package was discontinued, the sports appearance package available for the Z28 was essentially the same thing. This year, all Z28 coupes had black roofs, while base models had body-colored roofs. Since the interior had been updated for the 1997 year models, the look stayed the same for 1998. Other changes this year included standard second-generation airbags.

More than doubling the production numbers of the second best-selling Camaro, 54,020 base model Camaros were produced. For those keeping count, that’s right at 70 percent of total Camaro production for the year. As mentioned earlier, prices stayed relatively the same after a hike in 1997, and at $16,625, a base Camaro was only $410 more than it had been the previous year.

Rounding out the bottom of the Camaro production was the SS model, with 3,025 units made. The performance and appearance package was available for the Z28, and included a hood with a functional air scoop and a modified induction system that increased horsepower to 320. The SS came standard with a 17-inch wheels and a distinctive spoiler that was new for the model year.

Camaro originally was introduced in 1967 to compete with the Mustang, and more than 30 years later, the two cars were still going head-to-head. In fact, other than Camaros GM cousin Firebird, the two cars were the only pony cars still on the road. New sporty imports, however, were continuing to take up more market share every year. While Camaro sales had been comparable to Mustang sales the previous year, 1998 was a much-improved year for Mustang as Camaro sales declined. Almost 100,000 more Mustangs were made in 1998 than Camaros. By 2000, that gap would be even bigger.

In 1998, Camaro only had four more year models left before it would be discontinued for the first time since its introduction. Sales would decline after 1998 and then hold relatively steady around the 40,000 to 45,000 mark for most of the rest of its career, barring an even more dismal year in 2001. 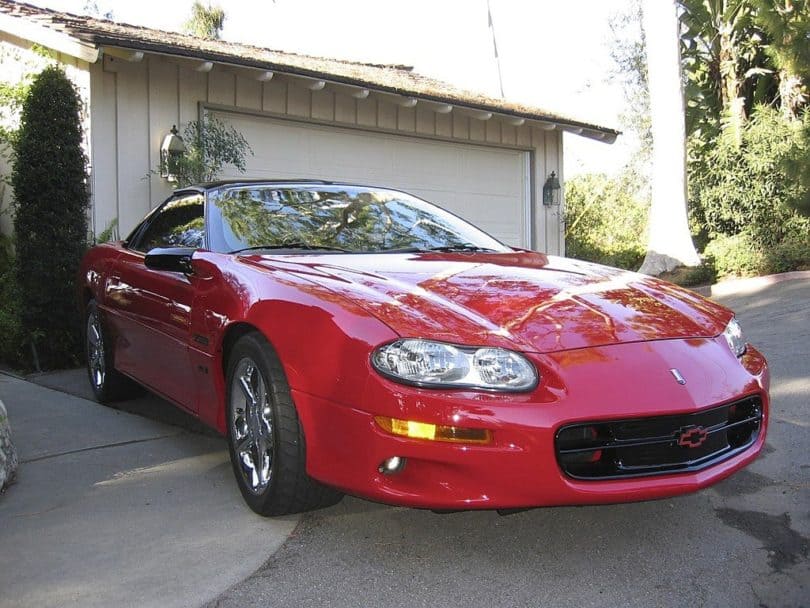 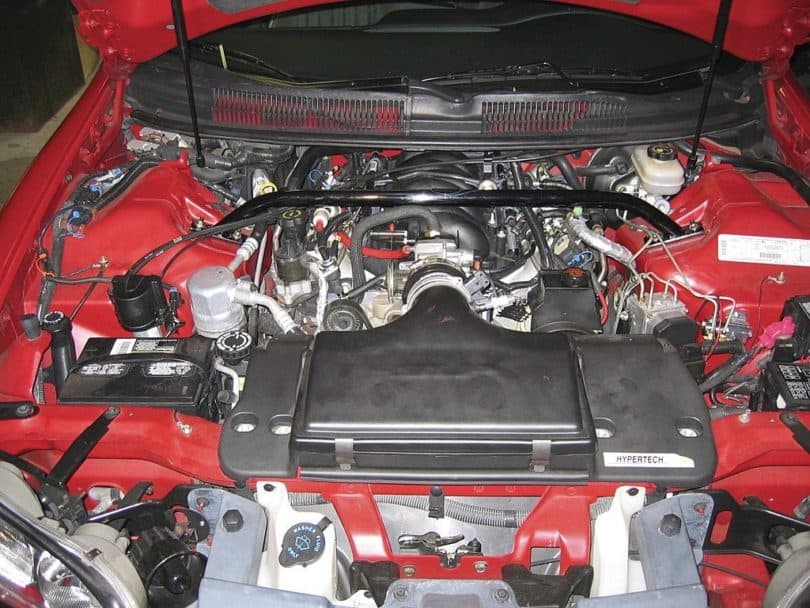 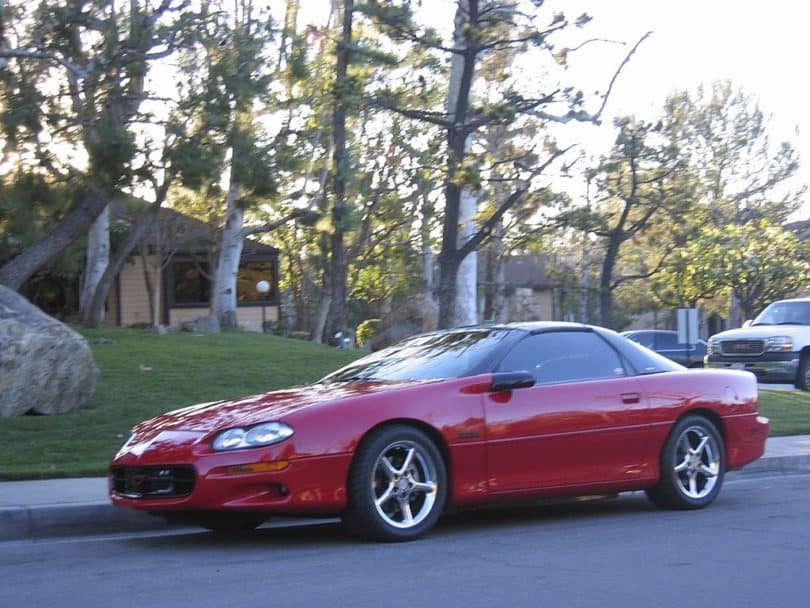 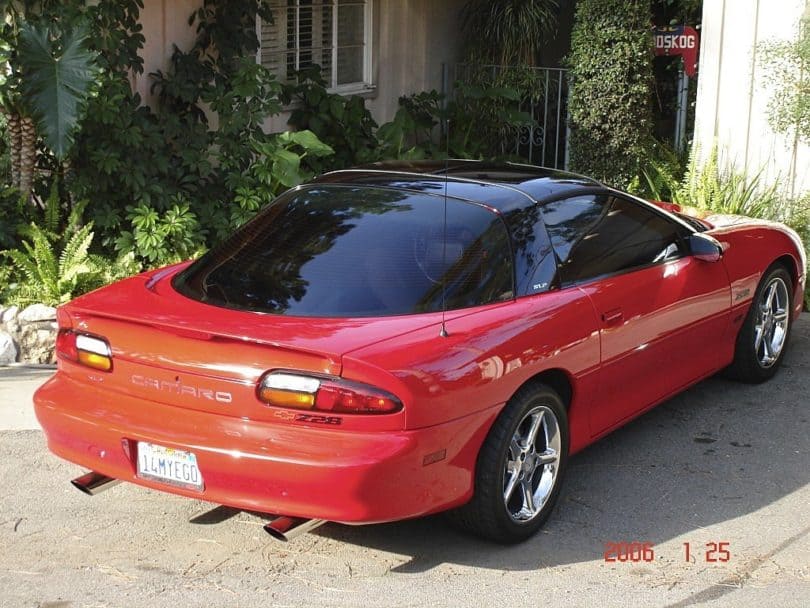 The 98 Camaro got a few changes from 97. First was the new front end, second and most important is the motor. The LT1 and TPI engines had the same cast block as the 67 350. Yeah the displacment didn’t change cause the engine didn’t change. 5.735 is 350. But the engine was getting dated.(don’t get me wronge this is an awsome block) GM decided to axe the iron block for a lighter aliuminum one; that weighed 80 pounds light dressed. Ironically the car weighed more then the 97. I was curious why and the only answers I have gotten is that the front end is heavier and the brakes where a little larger. Still its odd.
Now performance. Well the LS had big shoes to fill, and it filled them. The LSs specs made it really a 348inch engine, but it was and is cleaner. Meaning that GM could make it more wild and still pass emissions. The set of the engine made high power numbers. That being said the LT and TPI engines are known for have amazing power bands. Meaning the make peak power and keep it for 500+ RPM and the LS makes it a strong pull then drops off a bit. But this means the LS can make more power, and the other engines do more with the power they make. So its an oppion what motor is the best, but the LS has more advantages. GM claims that for 98 it makes 305hp. I have driven a few of these and I think its one of the most underrated power claims gm has ever posted. I mean the 97 LT1 claim was 285 but I’ve seen dyno saying 291, but this engine is more like 340.
On another topic the trans is another option to consider. A Camaro guy whos into 4th gen will usually tell you if you want an auto trans you want a 94-97 camaro, but if you want a manual the 98-02 is what you want. Even you have an auto LS car you’re still in very good standings as well as the manual LT cars. Really its preference, just those trans/engine picks will make you a tad quicker.
The styling is cool. I perfer the rocket style, but this is a good looking car. The ride is the same as the 97, but the engine seems a bit more silent. I really only hear the exhaust note.
Point being, this car is more advanced then the previous model. But its still oppion which you like more. But really any 4th gen Camaro is a good car. Any V8 Camaro, always a good choice.