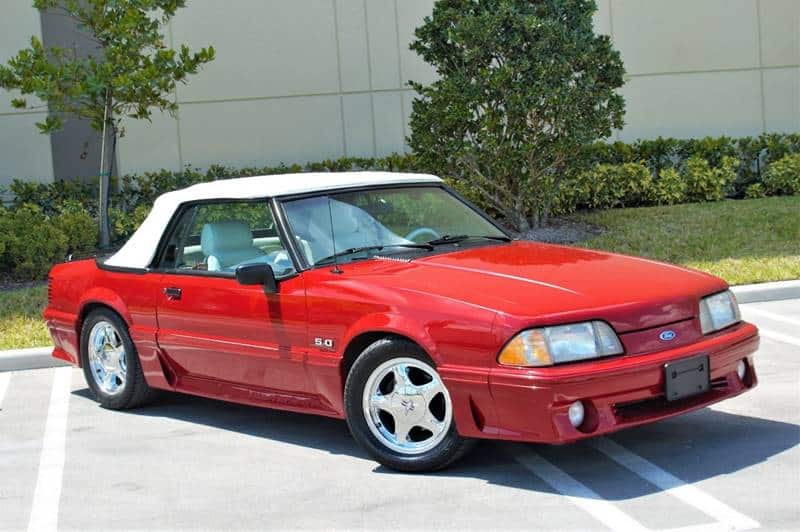 “Dip deep into their throttles at any rpm and the frisky Fords respond with a wallop of good old-fashioned American torque—enough to make you forget all about four-valve combustion chambers and high-tech turbochargers.” Car and Driver magazine, “1988 10 Best Cars”

After the significant update to the styling of the 1987 Mustang, Ford chose to leave the car alone for 1988, changing virtually nothing in styling or performance. It turns out the choice worked, with the aforementioned production jump to 211,225 Mustangs, as opposed to 159,145 in 1987. This is despite the fact that almost all Mustang models now had a base price of over $9,000.

Performance options stayed exactly the same as they had been in 1987 when Ford decided to keep the engine options simple with two: a four-cylinder and a V8. The four-cylinder, standard in all LX models, was a 2.3 litre engine producing 88 horsepower. This was basically the same engine that had been introduced in 1974 for the then new Mustang II (the second generation Mustang). Standard in all GT models, which unlike the LX was not available in a coupe version, was the 5.0 litre V8 producing 225 horsepower. With the gas crises at least somewhat forgotten by 1988, Ford recognized the renewed desire for performance by some drivers. After a horsepower reduction for the V8 in 1986, The V8s in the 1987 and 88 Mustang were back up to the respectable 225. This provided a quick GT model and a very quick LX model when the upgraded engine option was chose that, as mentioned before, quite a few Mustang buyer’s had caught onto by this time.

As would continue through the rest of the third generation Mustangs (which were produced through 1993), Ford was using more “aero” designs for most of its vehicles, and the Mustang was no exception. Introduced in 1987, the more modern flush-mounted halogen headlights and the absence of a grille provider the sleeker look that, according to the sales numbers, seemed to be what the public desired.

As per a trend started the previous year, the Mustang was only available in two models in 1988, the LX and the GT. Though until 1986, Ford spent a number of years catering to “luxury” Mustang buyers with specific models like the Grande, Ghia and the most recent GLX. By 1987, however, it seems Ford was content with just the performance GT and the base model available, but with a multitude of upgrade options. Though they no longer used the phrase in advertising, it seemed Ford was going back to the “designed to be designed by you” mentality they used to label the Mustang throughout the late 1960s and 70s.

With that said, the standard features available on the LX were more in line with what Ford had formerly termed the Mustang’s “intermediate” trim package (i.e. the GL models from the early 80s had more standard options than the formerly available L models). Most of this was in response to upgraded standard features from competitors like center consoles and instrument panels with more information. The LX and the GT would be the only available trim models up until the Cobra was reintroduced in 1993.

Unlike the old days when it seemed the Mustang’s only competition (when it had any at all) was a handful of pony cars, the competition was increasing rapidly every year throughout the 1980s. Now Mustang competed not only with the other high-performance cars that were making a comeback throughout the late 80s, but also a slew of compact and subcompact cars whose fuel-economy excited American car buyers. Particularly worrisome to the Mustang at this time were the new imports were producing ever-increasing production numbers. In fact, while the Ford Escort once again held the top spot for best-selling cars in America, the following year would see that honor go to the Honda Accord, the first time an import had ever been in the top three best-selling cars in America. 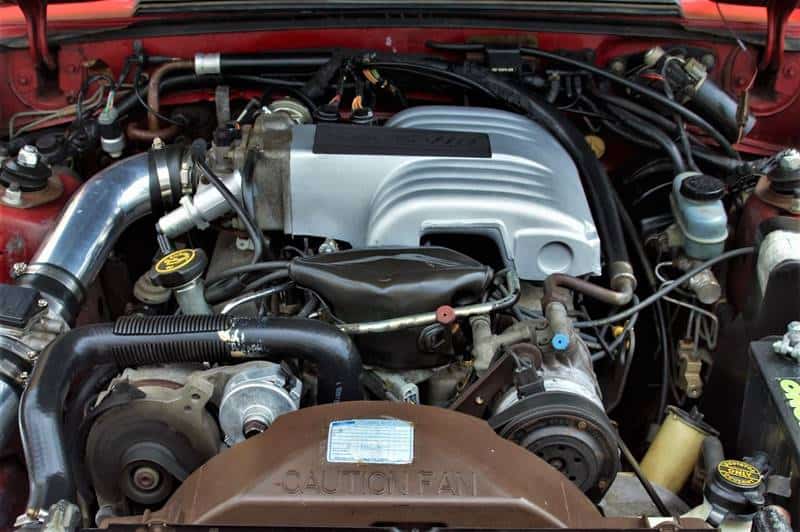 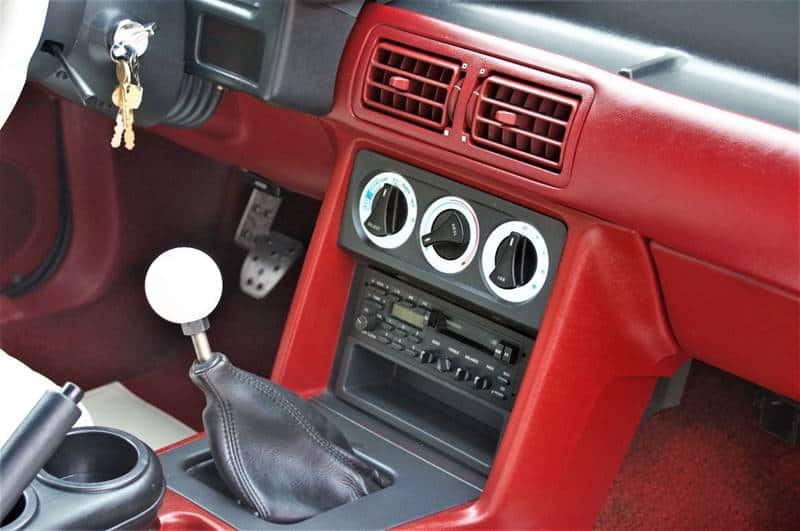 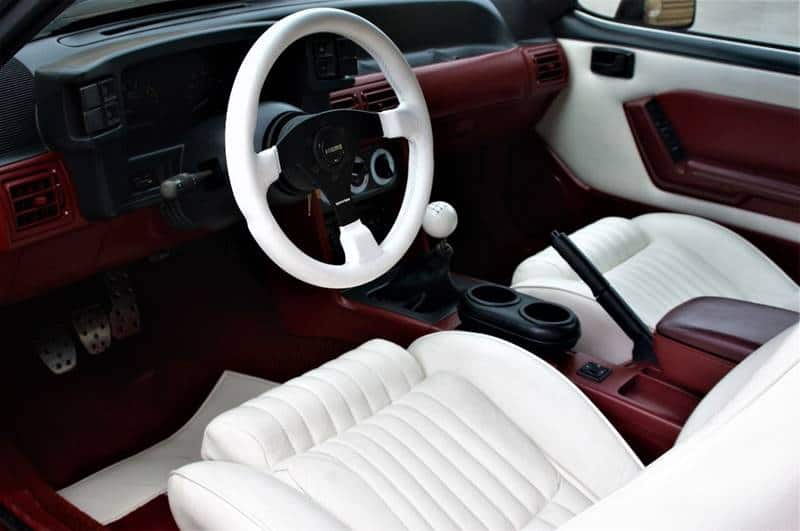 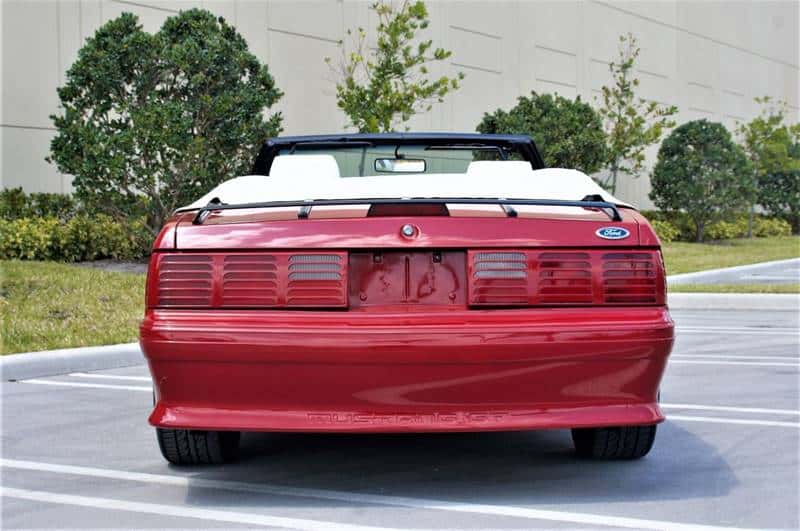 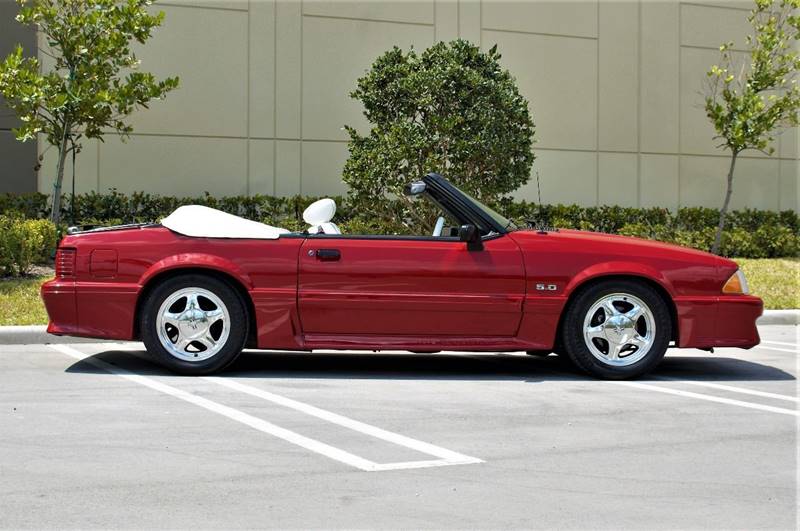 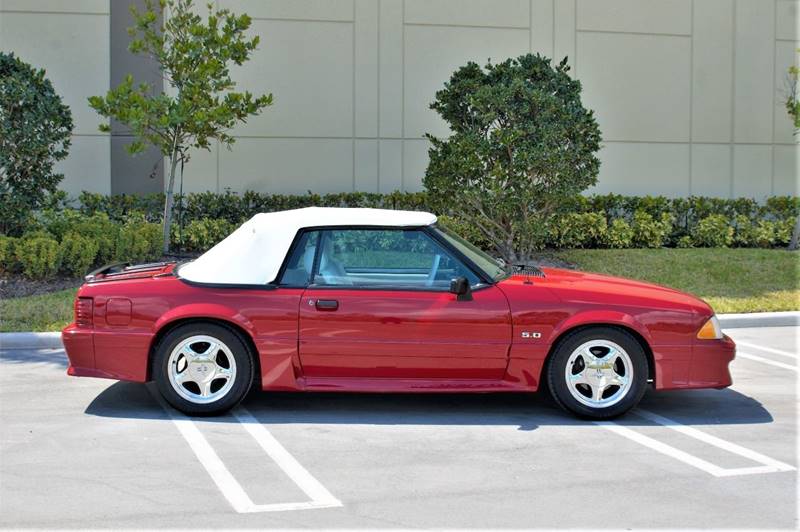 This car is very much the ungly duckling. The car is quick, but not powerful to start with. The 0-60 of a 5sp conv is 6.5 and top speed of the 87-92 is 138mph. This is only a quick average car stats in todays standard. The stock handling is like mush; bouncing into and out of couners. Fish tailing and drifting into any turn when pushed. Only pulling a .82g at 60. It is a white knuckle driver.
The brakes do well under its condition of a rear vented drum and a unvented disc in front. You still need to down shift and the ply tires need a performance tire to make a quick stop.
The engine is a torque thrusted load mouth, than a high horsepower racer. Although this car does only have 225hp, it makes the most of it. With the rear sway bars and 300foot pounds of torque, this car is its lime light on a stip or red light. Ford obviously had only a staight line in mind when they built this car. That really accually hasn’t changed over the years.
The looks of the exterior is dated and drab. All the hoods are the same, and only the GTs have a sporty look. On top of that, only the conv get peoples attention. Like wise the car is pretty in red, black, and blue. The other colors don’t always sit well with it.
Transmissions are something to watch out for. The manuels are great and give a little more kick and extra mpg. The autos as the one that was tested; are infact clunky and really a let down on a stock 5.0.
Now the good. This is the easiest car to work on and find parts for. You can modify to what ever you desire. A 500hp supercharged monster, or a coldair,flowmaster daily driver. The brakes can be upgraded to front slotted that will help incredably or a four wheel disc conversion. Lowering kits, and shocks and struts are plentiful from drag to curcuit/street.

The guys who don’t know why this is so popular don’t understand a mustang for everyone.